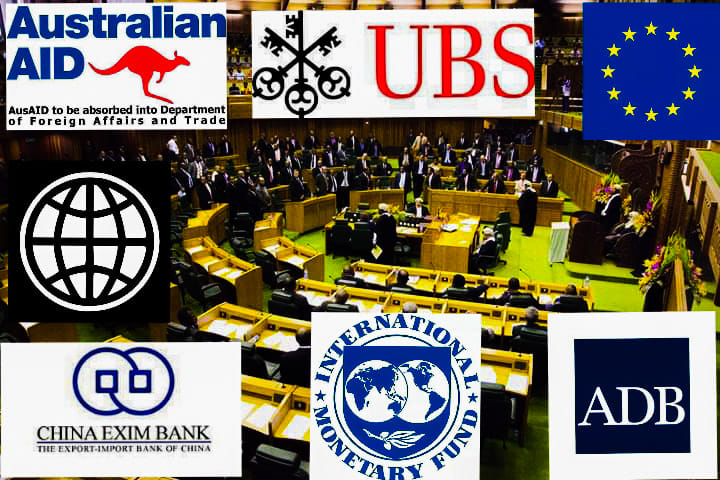 PNG WHERE YOUR KINAS BUYS MORE

The economy of the world and the way money is valued, is one of the biggest scams of the universe. Money and wealth are naturally backed by mineral resources, land, and basically physical commodities such as precious metals. But in Papua New Guinea, it is not so. It has created a view on national success as putting priority budget areas on financial assistance.

Papua New Guinea has been recipient of foreign assistance since independence and prepare our budgets factoring the aid dynamics into them. Important issue we must look at is the financial assistance has obviously been a primordial source of income for many Papua New Guinea. It has certainly improved the lives of many folks at the local level.

However, continuous dependency keeps Papua New Guinea on its perpetual ‘child like state.

The reason why Papua New Guinea, lag behind in terms of development is because our politicians have come to love ‘handouts’ more than formulating self sufficient policy platforms of their own.

It is the same mental laziness and myopia that makes Papua New Guineans to blindly follow false prophets and pyramid schemes in spiritual marketplace, and in politics we worship the most corrupt thieves of public funds.

Politicians handouts mentality creates a culture of dependency beneficial only to the donors. It has continuously deprived us from our dignity and the power to believe that we hold the solution to our current problems. If politicians don’t think they have the power to solve their problems, they won’t even think about how to solve them.

“The popular theory of “the resource curse” – that natural resources might be more of an economic curse than a blessing – is commonly used in academic and policy discourse to explain away the paradox that resource-rich countries tend to have less economic, developmental and even democratic growth than countries with fewer natural resources”.

The cause of “resources curse” in Papua New Guinea societies is politicians handout mentality. We can not always shift blame, because Papua New Guinea in particular can’t run mostly her economy without the help of foreign financial assistance, the people who own the means of production.

The presence of handouts mentality legalizes and normalizes the plundering of countries’ natural resources. Our Mineral Laws become the source of economic exploitation. Moreover, foreign assistance legalized plunder and accelerates the exponential exploitation of our resources.

Henceforth, the roots of our underdevelopment are neither poverty nor corruption but Politicians handouts mentality drains Papua New Guinea of its resources at the expense of ordinary citizens. Even worse, it deprives ordinary folks of their God-given right to self-determination.

Foreign financial assistance is a skillfully managed reconquest of Papua New Guinea, intended to subjugate its growth and development through resource manipulation. Thus, each one of us becomes the financial slave, which is to say a true slave, of those who had been treacherous enough to put money in our government with obligations for us to repay through our natural resources.

Already Papua New Guinea has locked itself on loans and development aids or bilaterals that come with conditions that mainly not working for Papua New Guinea. Multinational companies of foreign origin, who have been sucking Papua New Guinea natural resources for decades, and have used our resources to enrich their economies.

Because politicians are not led by self-reliance ideologies, their stomachs lead them.

As long as politicians handout mentality exist, the manipulations of monetary organizations such as WB, IMF, Ausaid will continue to connive with our politicians to frustrate the economy and keep our currencies in low value.

Why are politicians continue to embracing financial handouts even we know it is taking us nowhere?

Because most financial schemes are not very much willing to teach us how to fish so that we can eat for the rest of our life. They are only interested in giving us fish so that we can only eat for one day. The ugly truth is that donor financial assistance are not the panacea our country’s development.

Therefore, Papua New Guinea can not continue to rely on foreign financial assistance to finance its transformation. We have to reach a point where we can finance our own transformation. These financial assistance has been useful and continues to be useful but the point was never to remain dependent forever yet we have always had the potential to be wealthy ourselves.

The concepts of loans and development funds in a form of financial assistance are simply tools in the arsenal of the donors, wielded not for the sake of charity but for the sake of resource control. A donor funded state is a very weak, vulnerable and economically and politically insecure entity.

It is time we should never be hoodwinked by the donors that their financial assistance is meant for the national development. None of those financial institutions are doing so just for the love of PNG. They are coming for the resources exploitation. It is the duty of our politicians to ensure that the interests of the nation is upheld or even bettered.

However, what is more painful is that we do not have politicians who can stand up against the handouts mentality. What we mainly have are stooges and cronies. They do the bidding of their foreign masters.

The handout mentality within our political rimmed is real. We will have to fight it the same way we fought for our independence. This time we have to make sure we are truly independent. If politicians wanted Papua New Guinea to become economic independent and self-sufficient.

If they seek to transform not only distribution, but the mode of production itself – putting the tools, not just the produce, in all of our hands.

We have to eradicate handout mentality, by saying no to foreign financial assistance and take the first step in the thousand-mile journey to economic development.

True development does not come on a silver platter. You toil, sweat and struggle for it. It’s only false development that comes through fake generosity that some amongst us will defend with their short-sighted convictions as they end up hating those leaders who are brave enough to think outside the neo-liberal development box.

We shall never be independent if we need every project or any productive activity in our country to be funded by the international financial institutions or donor countries.

Papua New Guinea must strongly believe that there is no economic approach that is truer, more accurate, or more valid than any other economic plan. Is to say no to foreign financial assistance. Let us consume what we produce, utilize our little resources for economic growth and social change.