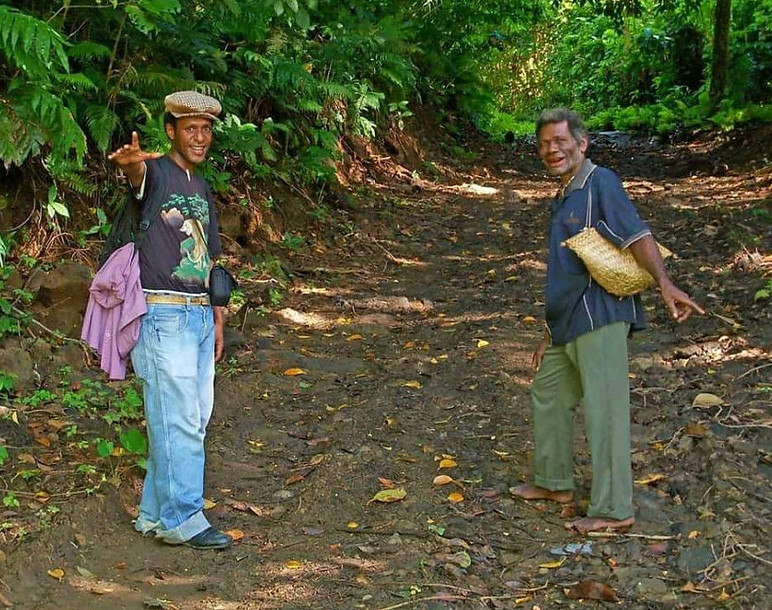 My mom, a typical K-Mori from up the Purari River in the Gulf Province had dragged my lazy frame out of bed at 6 am that morning to eat my breakfast of fresh Nakanai taro baked over the fire with a cup of lemon leaves mixed sugar. That morning I would travel for four hours along 320 kilometer stretch of highway from Bialla to Kimbe to buy my first English materials at the Flexible Open and Distance Education (FODE). Read the full story of Alexandra Nara who is the current Public Relations Officer for Department of Defense.

THERE IS ALWAYS A SECOND CHANCE – SUCCESS THROUGH FODE.

It was a trip one rainy February morning in 1997. The heavy downpour overnight that assaulted the rusty corrugated roof of my old man’s house at Bialla Primary School in Kimbe, WNBP had just slowed down.

Pale glows of the rising sun seemed dead as dark clouds hung low over the infamous White men ranges that formed the spine of New Britain Island connecting the Nakanai range to the west.

My mom, a typical K-Mori from up the Purari River in the Gulf Province had dragged my lazy frame out of bed at 6 am that morning to eat my breakfast of fresh Nakanai taro baked over the fire with a cup of lemon leaves mixed sugar.

That morning I would travel for four hours along 320 kilometer stretch of highway from Bialla to Kimbe to buy my first English materials at the Flexible Open and Distance Education (FODE).

I stared into the distant murky sky towards Kimbe and thought of the long unpredictable trip ahead.

Violent winds and nonstop heavy rains is normal every year around especially from late November to early March since the worst flood disaster in 1992 when permanent bridges over the rivers Yamulu, Ivule and Tiauru that linked Bialla to Kimbe were swept away by the floods.

The first PMV would drop us off at the first blockage and we would walk most of the way or be transported by chain dozers across those flooded rivers, landslides and over-flowed drainage before getting on waiting Public Motor Vehicles (PMV) on the other side to get to Kimbe.

I swallowed down the last contents of the cup and packed half of the baked taro into the old Murik basket making sure it does not spoil my tobacco leaves I secretly hid inside for the journey.

Gutters were still running with garbage and strong winds swept through the trees as I stepped out from beneath the sago roof of my mom’s little haus-kuk.

Light figures of showers burrowed their way through my thin jacket and into my gauzy frame, chilling my pale skin as I negotiated my way through the muddy track leading to the nearby bus stop.

About an hour later I was holding tightly onto the corner of an old Mitsubishi canter as we maneuvered through the huge potholes with our talkative ‘boskru’ confused between controlling the partly broken canvas covering us and trying to convince passengers to buy his buai sales.

It was that trip I took 20 years ago with the desire to take up open and distance learning courses which changed my whole street life of petty crimes, drugs and homebrew and brought me to Divine Word University where I walked out as a journo in 2003.

Open and distance learning traces its origins to mid-19th century Europe and the United States where the pioneers used the best technology of their day, the postal system, to open educational opportunities to people who wanted to learn but were not able to attend conventional schools.

People who most benefited from such correspondence education included those with physical disabilities, women who were not allowed to enroll in educational institutions open only to men, people who had jobs during normal school hours, and those who lived in remote regions where schools did not exist.

In PNG, open and distance learning has created a major shift by providing educational opportunity to rural populations and unfortunate students who cannot continue within the main education systems or make it through to higher institutions due to various reasons.

This also includes businesses who use distance education programs to train employees or to help update their skills or knowledge where the employees may take such programs in the workplace or at home in their spare time.

It allowed learning in more convenient locations and often at more convenient times when it encourages more equal and open communication than what occurs in conventional educational settings.

Recently I sat inside the Sogeri conference room of Hideaway Hotel reading through these Flexible Open and Distance Education (FODE) materials again.

This time not as a student but a graphic designer called to participate in a workshop to assist in the layout and redesigning of diagrams, formats and images for insert into all grade 10-12 science materials.

The books brought me back to that 320 kilometers stretch of highway where I travelled each month from 1997 to 2000 to drop off assignments and work my way back into the mainstream education system after dropping out from Grade 10 at Bialla High School in 1995.

FODE still stands as the only second chance and opportunity for upgrading and further education.

Today I am glad I am brave the rains that February morning, cross over landslides and dangerous fast flowing rivers with my Murik basket that contain nothing but a fresh baked Nakanai taro and a few tobacco leaves.

Alexandra Nara is the current Public Relations Officer for Department of Defense.

Thanks for reading Solomon Aplas Motivation.