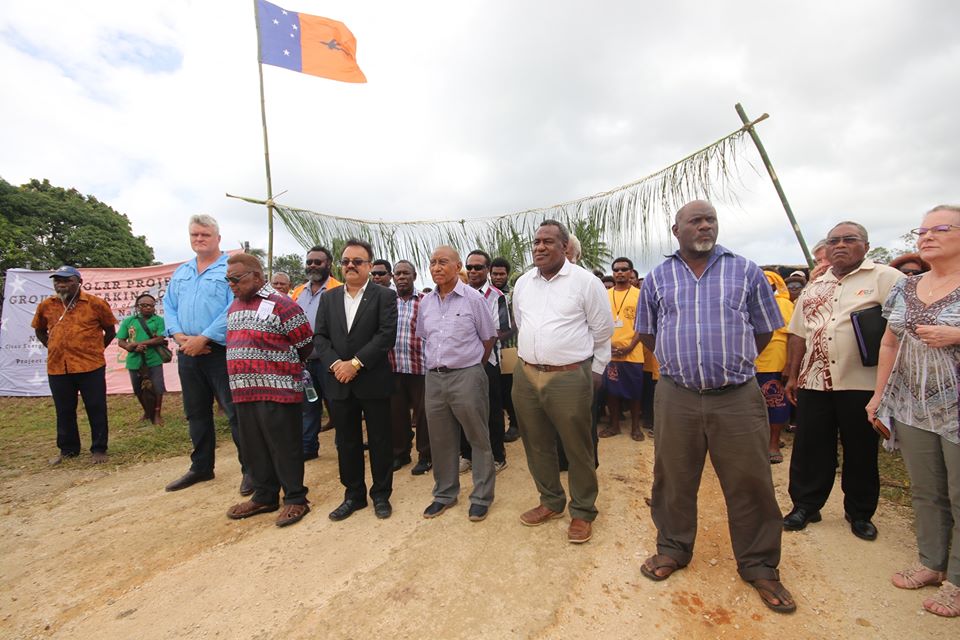 In a show of overwhelming support, the people of Namatanai turned up in numbers for the groundbreaking of the 0.4 Megawatts Solar Power projects for Namatanai Township attended yesterday by the Governor Sir Julius Chan and his PEC chairmen’s, the Provincial Administrator and senior executives and the project developer, Zenith Construction Limited and the funding agency, New Ireland Development Corporation.

Construction on the ground will begin on the 15th of March, announced by the Managing Director of Zenith, Mr. Salim Chamadia, and take seven months and be ready for handover and commissioning by October this year.

The second highlight of the groundbreaking ceremony was the attendance of 100 delegates from the Murat and Kavieng Urban LLG’s who are special guests of the Government on a four-day excursion under the Community Awareness initiative of the New Ireland Government.

The K6.1 million Solar Power project will incorporate 100 square meters of solar panels and other hi-tech facilities which will be the main components of the construction and will include the existing power lines and installation grid.

The Solar Power project of such magnitude is set to be the first in the country and Melanesian countries as a whole and is aimed at taking dependency of Power generation away from diesel dependent generators. This includes solar power plants for Kavieng District (2 Megawatts) and Konos (0.11 Megawatts) in the Sentral LLG.

“This project is purely funded by the New Ireland Governments business arm NIDC through its subsidiary NI Solar. We did not borrow money from elsewhere to make this project possible. This Project is huge, it will light up the whole of Namatanai and change the course of power generation in this country.

The installation of the Solar panels will begin on the 15th of March and the project will be complete by 1st of October this year. We will do away with fossil fuels and place New Ireland in the hands of God, harnessing the power of the Sun,” said Governor Sir Julius.

President of the Namatanai LLG Joshua Sakin expressed gratitude towards the project stating the people of Namatanai had suffered for too long without power supply. “We have suffered long enough without Power and Water supply. Namatanai Town is going down instead of moving forward.

I don’t know if it was an act of God or man but eye blo Namatanai i pas when I lost the election in 1997. Byron came and started it again, but when the generators broke down and when Byron lost you were left in darkness again. Development is about the Leadership.

We have to work together, maski lo daunim man, the fact of the matter is you don’t know how much I’ve done for Namatanai, you have no idea because you were just born yesterday. I have spent over K100 million on Namatanai alone on roads and bridges since becoming Governor.

We can talk big but it is action that speaks Loudest. Every road, bridge, school and Namatanai Secondary was built during my time. Namatanai was moving faster in my time than any other districts. From Poronbus to Lipek, Muliama and Metlik, and West coast to Palabong and onward, to the Islands of Tanga, Malendok and Boeng.

My Government has never forgotten Namatanai. I stand by my Governments policy of “The further you are the more we care,” said Sir J.