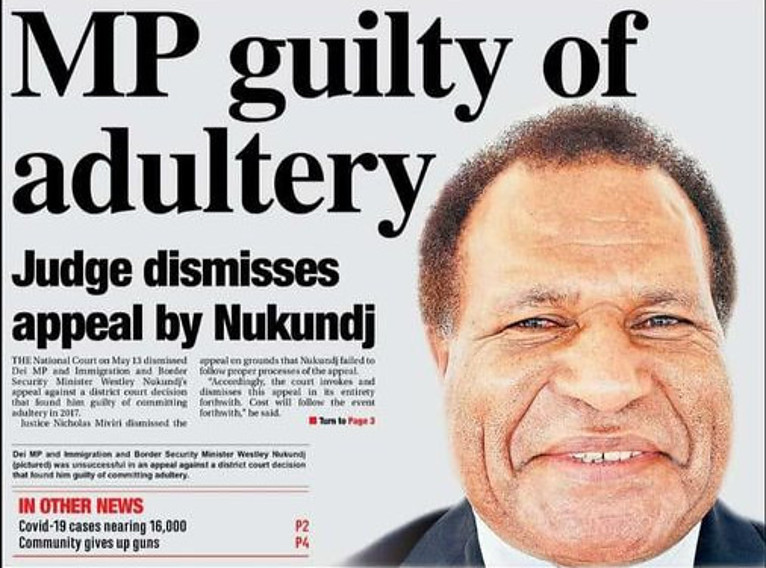 Dei MP and Immigration and Border Security Minister Westley Nukundj’s appeal against a district court decision that found him guilty of committing adultery in 2016.

THE National Court on May 13 dismissed Dei MP and Immigration and Border Security Minister Westley Nukundj’s appeal against a district court decision that found him guilty of committing adultery in 2016.

Justice Nicholas Miviri dismissed the appeal on grounds that Nukundj failed to follow proper processes of the appeal.

“Accordingly, the court invokes and dismisses this appeal in its entirety forthwith. Cost will follow the event forthwith,” he said.

The matter originates from 2016 and an appeal was filed a year later.

The application for the appeal’s dismissal was made on April 22 by the respondent, after about five years of court proceedings.

Justice Miviri said it was inordinate for the hand of justice to be denied a litigant in person.

“A letter of notice was filed to Nukundj’s lawyer advising that the matter came on before the court on the Feb 15 and was adjourned for trial and hearing on March 5,” Justice Miviri said.

“It also gave notice that this is a final adjournment of the matter.

“And if there is no attendance, the application for dismissal of the respondent will be heard and finalised.

“The respondent for a litigant in person has abided by the terms of any orders that the court has made to see this matter out between the parties.

“Bearing that Nukundj has a cause of action clear by the pleadings set out above in the notice of appeal filed on Oct 5, 2017.

“But there is no vigour and stamina shown to expedite it to finality,” Justice Mivir said.

“The records of the court leading up do not show attendance either by counsel or by Nukundj to assist as to why the delay.

“And there is no material filed to explain the non-attendance either by Nukundj or the lawyer.

“It has been left in abeyance in the foyer of the court time and again to be attended to by the respondent, who has been drawn in by Nukundj.

“He instigated and must see it out with the same vigour when he filed.

“Justice has been denied to the respondent since 2016 when the orders were made against him.

“He had to endure denial of justice for five years.

“Nukundj, through his lawyers have instigated, yet made no genuine effort to see it out as pleaded.”