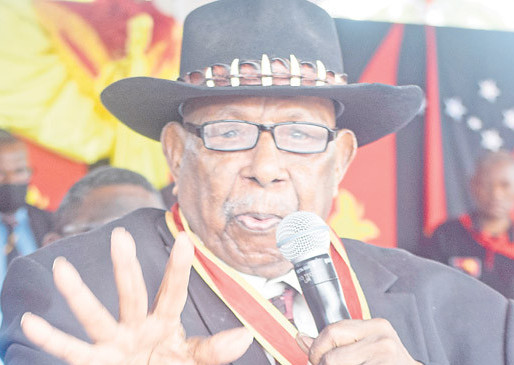 Sir Pita was the sort of self-made politician whose presence alluded drama and glamour through his boisterous loudness, and sat in all 7 House of Assemblies in colonial era Papua New Guinea


VALE SIR PITA – The Man Who Sat in all 7 House of Assemblies in Colonial era of Papua New Guinea.

Sir Pita Lus was a larger-than-life character. Witty, aggressive at most times driven by his Pangu ideology, visionary yet unsophisticated, Sir Pita also aspired in the world of colloquialism.

His spate with only lady MP, late Nahau Rooney of Manus is well versed, and there are many more fireplace jokes and journeys of the loveable affable old bolt, whose fairytale political life and flamboyant times expired with his passing on October 01, aged 86.

Sir Pita was the sort of self-made politician whose presence alluded drama and glamour through his boisterous loudness, and sat in all 7 House of Assemblies in colonial era PNG.

He was overly passionate and even more lively, who subdued his opponents with a deep stare, a wrangle of his old fist and a sway of his chiefly pig tusks he wore so glamorously to Parliament.

Young politicians cringed in fear of the little man who seem to be invincible in the chamber, yet fatherly on the grass outside Parliament.

Energetic and animated, he was never one to miss a beat with sparkling words of wisdom, inspired encouragement, even colourful prose and downright humour, adding a punch here and there, that made him the stuff of parliamentary folklore and legend.

“Nem blo mi Lus tasol mi nonap lus,” (My name is Lus but I will never lose) he often jokingly mused when elections drew near. Eventually it caught up with him when he was unseated by Gabriel Kapris a decade ago. His former seat is now held by John Simon.

He campaigned vigorously for Somare in the sixties, riding his battered motorcycle up and down the Sepik highway, his trademark tirades heralding Sepiks to back a young Somare. It worked and the rest is history.

Never once did Sir Pita let Parliament down, nor did he leave his people of Maprik off the map.

Even the use and eloquent pronunciation of his district’s name Maprik, elicited giggles from the public gallery and boggled the Opposition.

Once in Parliament, the press gallery was left in awed shock when the Wise One, rattled by the opinionated constant questioning by an Opposition MP, rose from his government seat, crossed the floor at a leisurely stroll and punched the unexpectant Opposition frontbencher with his bare fist.

Pandemonium ensued. It was the first ever boxing match on the floor of Parliament in Waigani. Fortunately, no footage exists to this day as TV cameras were not allowed to record in the hallowed chambers of the house in the 90s where sometimes, proceedings were footloose and oft times Pita Lus.

For the man who believed he could not lose, fortunately there were no tik tok, FB or social media cameras at that time to capture his lively moments. We can only recall what we witnessed from the crow’s nest.

One senior PC reporter once found Sir Pita at the Jackson’s domestic terminal. In his hand was huge cooking pot, the type that can feed 20 or more people.

The curious bystanders, all expecting another flawless Pita Lus masterclass, roared in approval. Although funny, Sir Pita often showed his humanitarian heart. As a member of the South Seas Evangelical Mission church, Sir Pita allowed homeless West Papuans to live on Church land at 8 mile outside Port Moresby for a while.

The Post-Courier shares in the sorrow of the people of Maprik, the immediate family and PNG on the loss of one of Papua New Guinea’s founding father, the ever-flamboyant Sir Pita Lus.

Pictures: credit to Kalakai photography and The National.