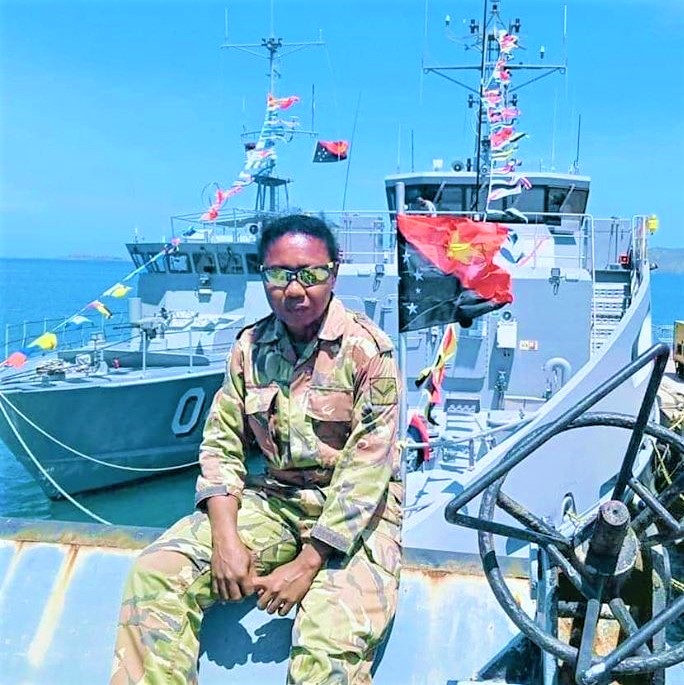 "I joined Papua New Guinea Defense Force (PNGDF) because I saw people of different qualifications and specialties serving in this great organization and I knew there was a career path for me in wearing the camouflage uniform. I only needed to find my purpose." Laina. - Sharing Papua New Guinea woman success stories.

My name is Lance Corporal LAINA DAPHNEY. I come from Lido village in the Vanimo Green Electorate of West Sepik. I am the first female soldier to join the Papua New Guinea Defence Force Maritime Element.

I joined PNGDF because I saw people of different qualifications and specialties serving in this great organization and I knew there was a career path for me in wearing the camouflage uniform. I only needed to find my purpose.

I have a business studies background, but during the recruit training, I was interviewed to qualify cookery trade.I accepted the offer and signed a four years apprenticeship endanger on the 4th of October,2012. I spent six years qualifying my trade in COOKERY - COMMERCIAL COOKERY.

Because I was going to be the first woman to join the navy, I was promised long-term civil schooling to allow for my accomodation aboard HMPNGS to be ready.

So two years into my training, HMAS LABUAN was refitted with female cabin and commissioned into the PNGDF Maritime Element as HMPNGS LAKEKAMU in the Landing Craft Heavy Fleet on the 4th of December,2014.

That was my motivation to qualify other support trade.

I am grateful for the confidence in my posting as the Catering Compliance Manager to HMPNGS BASILISK. I am so happy I got to be the first female chef onboard HMPNGS. I am glad I am greatly supported by the male counterparts, my fellow apprentices being the only female many at times.

For the love of food I can't stop education. LCH L33 was my first and she gave me content trade knowledge and made me a mother of twenty-six heads (maximum crew size).

Being a woman, they not only run to me for kitchen needs but also to give a helping hand or a listening ear or be the sister or daughter when we away from families.

The older seamen became fathers, the younger ones are like sons and those from my era are the brothers I don't have close to me when I am far from home.

I am passionate about cooking. I also enjoy the company onboard HMPNGS LAKEKAMU and the crew who are family.

HMPNGS Lakekamu,the Gulf lady from Lakekamu is slow moving but hard hitting and yes she has a place for women tradies. That's why I love her more.