Approved For Release: September 29, 2022 – Marape Rosso Government.
Prime Minister Hon. James Marape has invited leading Japanese company Sojitz Corporation into the upstream and downstream processing of liquefied natural gas (LNG) in Papua New Guinea.
He made the invitation to Sojtiz during a meeting with President and CEO, Masayoshi Fijumoto, and his delegation in Tokyo on Tuesday (September 27, 2022) during his one-day visit to attend the state funeral of former prime minister Shinzo Abe and bilateral meeting with current Prime Minister Hon. Fumio Kishida.
PM Marape – who was accompanied by International Trade and Investment Minister Hon. Richard Maru, East Sepik Governor Hon. Allan Bird and PNG Ambassador to Japan H.E. Samuel Abal – said the Government would make land available for Sojitz to come into PNG in a big way.
PM Marape said Sojitz had been wanting to venture into downstream processing of LNG in PNG, as well as go into the upstream sector, and apologised for delays in making this become a reality.
Sojitz Group, which has been in PNG since 1963 when it started exporting lumber to Japan, is engaged in a wide range of businesses globally, including manufacturing, selling, importing, and exporting a variety of products, in addition to providing services and investing in diversified businesses, both in Japan and overseas.
It is particularly wanting to break into the petro-chemical industry in PNG – for which it already has an agreement with Kumul Petroleum Holdings Ltd (KPHL) – to produce ammonia.
“You have been waiting patiently for the last six to seven years,” PM Marape told the Sojitz delegation.
“Now that I am prime minister, we have no excuses not to progress these business intentions of Sojitz, an established company in Japan which is also involved in business in PNG since 1963.
“I thank Sojitz for its continued presence in PNG since 1963 and we have a special place in our heart for you.”
PM Marape said Minister Maru has been tasked with bringing in investors such as Sojitz into PNG and he would be a “one-stop shop” for all foreign investors.
He asked Sojitz for a fresh expression-of-interest which would be fast-tracked by his Government as a matter of urgency.
“This is consistent with the global trend into the cleaner energy space,” PM Marape said.
“Going forward, the Government in keen on KPHL getting more gas for the domestic market, at an affordable process.
“Sojitz is welcome to partner in downstream processing of gas.
“If you can give me cheaper petrol and cheaper diesel, and even the ammonia that you want to process, you’re my friend for life.
“Papua New Guinea needs to find solutions to the expensive petrol and diesel we are currently importing.
“It is ironic that we produce oil and gas, however, continue to import expensive petroleum products PM Marape said there were also opportunities in the upstream for Sojitz to go into.
“KPHL will now have first right to some of the smaller gas projects, and Sojitz is most welcome to join,” he said.
“If you want to go into upstream by yourself, you don’t have to partner with KPHL, you can go in on your own as well as in the midstream and downstream.”
—|||— 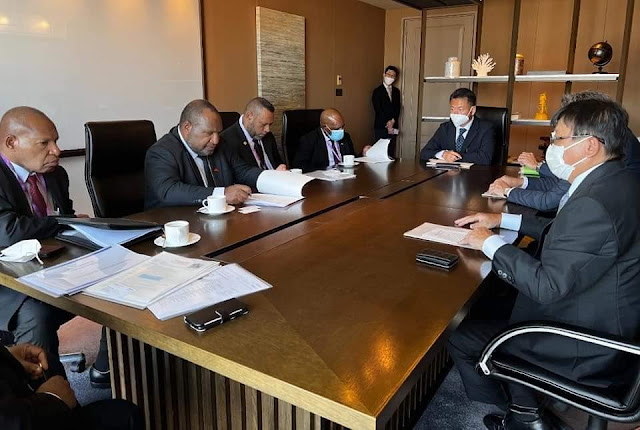