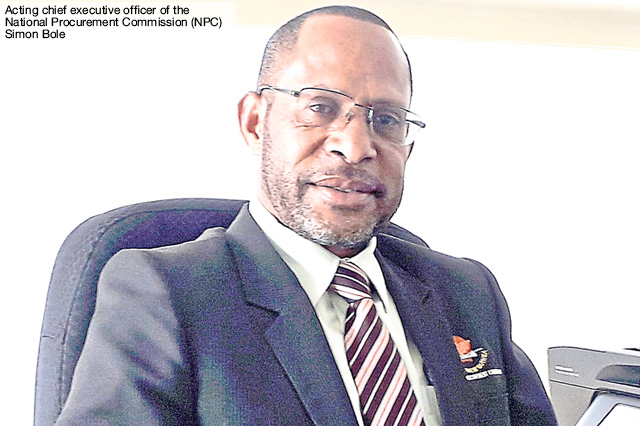 NATIONAL Procurement Commission (NPC) acting chief executive officer Simon Bole has put a stop to a contractor who had been providing pest control service to the commission for about K40,400 a month – Papua New Guinea.

A senior officer from the commission, who was involved in facilitating the contract, has been suspended pending the outcome of an internal investigation that is underway before the matter can be referred to the police fraud squad.
Bole told The National in an exclusive interview that the management under the former Central Supply and Tenders Board (CSTB) entered into a contract with a company called Good Pest Management Ltd (GPML) to provide pest control and fumigation services at CSTB Haus in Port Moresby.

“The contractor was engaged during November last year, before I became the CEO, for around K40,425 per month or K485,100 per year,” Bole said.
He said until May, more than K202,000 was paid to the company.
“I discovered the contract arrangement when the claims for the month of April and May were submitted to my office for payment.

“I saw that the payment of K40,425 per month was a lot of money and I called my officers from the accounts division to provide contract documents so I could assess the validity and genuineness of the contract.
“I found that the contractor was engaged through questionable means and I put a stop to their payment, suspended one of the senior officers who facilitated the contract and ordered for an internal investigation and it is currently underway.”

According to records from the Investment Promotion Authority (IPA), GPML was officially registered with IPA on Dec 21, 2018.

The contract agreement was entered into on Nov 30, 2018, even before it was formally registered with IPA and awarded a contract of K40,425 per month or K485,100 per year.

Bole said he and the executive division of NPC were now voluntarily taking the responsibility of cleaning and fumigating and had spent around K660 to purchase chemicals and equipment.