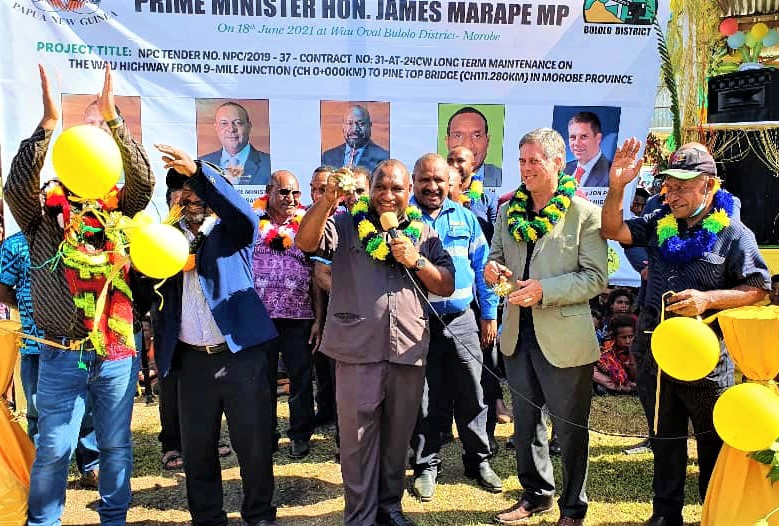 “By 2025, when PNG celebrates 50 years of Independence, a good road network must connect our country. The road from Garaina in Morobe Province should link Goilala in Central Province and to Kerema in Gulf Province, and open up and rehabilitate our existing road network.” Prime Minister James Marape said.

PM Marape said the Bulolo Highway was a key road that would serve the people of Bulolo and the Morobe Province, as it hosted many important projects like Zenag Chicken and Bulolo Forest Products.

“Coffee, copra and other small to medium enterprises like alluvial mining will rely and depend on the road, ” he said.

“It is right and proper because there are many businesses and industries that contribute heavily and have an impact on the economy.

“Now, more importantly with the up-coming Wafi Gold Mine and the existing Hidden Valley Mine, it is a right decision by the National Government and not because my Deputy Sam Basil is the Member for Bulolo. ”

PM Marape told hundreds of people who gathered at Wau that the Government wanted to open up the country by roads under the Connect PNG 2020-2040 Road Plan.

“By 2025, when PNG celebrates 50 years of Independence, a good road network must connect our country, ” he said.

“Therefore, this 9-Mile to Wau-Bulolo National Highway is very important.

” The road from Garaina in Morobe Province should link Goilala in Central Province and to Kerema in Gulf Province, and open up and rehabilitate our existing road network.”

PM Marape urged the people to take care of Government funded projects, till their land and get themselves involved in activities that would benefit them and their families and not to go into drugs and criminal activities.

The Bulolo Highway is supported by the Australian Government under the Transport Sector Support Program (TSSP) managed by the Department of Works.

“I am concerned that we are creating many high schools, and there are many children coming out of our education system and do not have a second chance, ” PM Marape said.

“I am appealing to students who are wondering around to get enrolled in the Flexible Open Distance Education (FODE) and other technical and vocational centres.”

PM Marape also announced that the National Government wanted the National Development Bank (NDB) to open a branch in Wau.

PM Marape accompanied DPM Basil to Wagau LLG to launch the sealing and upgrading of the Gabensis to Buang road.

He presented contractor Kaia Works K3 million for sealing of an extra 8km of the road, which will benefit thousands of people in the Buang LLG.

Whilst at Wagau, PM Marape and DPM Basil reconciled political differences they had during

DPM Basil said he was sorry that he listened to other politicians to change PM Marape, and he was lied to and apologized to PM Marape.

He said he would work with PM Marape now and into the next election in 2022.

PM Marape said he was happy that DPM Basil re-joined the Government and said he accepted him wholeheartedly.

“I want to say that Minister Basil is a leader in his own right and has the right to make his own move and decision, ” he said.

“I did not ask him to leave and always told him his position of Deputy Prime Minister was still vacant for him to return and reclaim.”

PM Marape also switched on the power to Mapos 2 Village in Buang LLG under the Bulolo District Rural Electrification Program.

PM Marape congratulated DPM Basil for bringing services and development to his people and urged him to continue the good work.

He spent the night at DPM Basil’s residence at Sagaiyo Village.

He also witnessed the launch of the Mumeng District Rural Local Lock-up, which the National Government is committing K50 million towards.

“The plan is to build a proper Correctional Service lock-up and will ensure the inmates can attend the Mumeng vocational school,” PM Marape said.