the most corrupt prime minister of papua new guinea 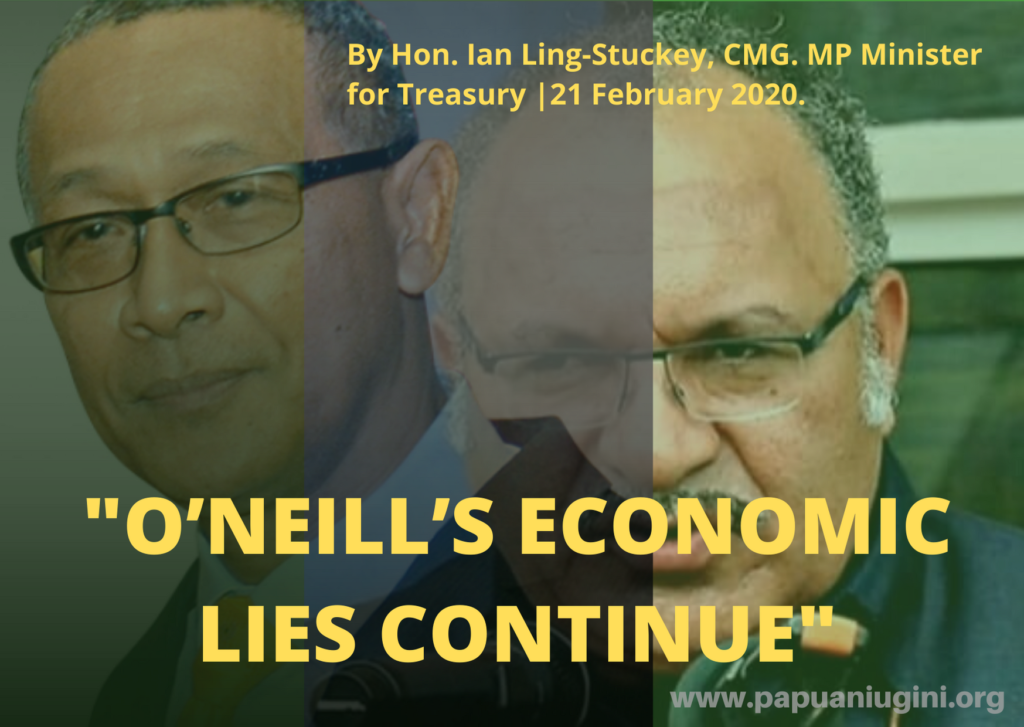 “Peter O’Neill does shame to his role as former Prime Minister by continuing to lie to the country about his economic legacy. During the years of his autocratic rule, he produced fake budgets, with fake national accounts, and fake growth figures.

I had hoped that when he was caught out for his fraudulent behaviour and deceptions through the Due Diligence exercise and confirmed by an independent IMF, at least he might stop lying to the people of this nation.

No, some people just can’t stop telling lies, willing to manipulate the truth for the sake of their own political agendas. Such behaviour is in stark contrast to the honesty and transparency of the Marape-Steven government.

LET ME SUMMARISE SOME FACTS – I WILL PRESENT MORE DETAIL LATER.

O’Neill dragged PNG into a debt trap. His economic mismanagement increased PNG’s debt by 435 per cent from K8.5 billion to K37 billion. He says total debt was K27 billion, but this is just a lie. O’Neill increased our debt by K28.5 billion. He hid these debt facts and by doing so broke the laws of our country.

There was a debt to GDP limit of 35 per cent, but he took us to 42 per cent. And his foolish UBS debt build-up has undermined our ability to repay our debts. He undermined the laws of this country when he dragged us into this debt trap. He then says we are going to increase it by 50% in just one year.

This is a lie. Because of the massive deficits he left us with, debt will increase but only by a total of 29% over the next five years.

O’Neill doesn’t understand even basic budget financing. Some facts on the K3.8 billion in external financing we are seeking this year. Over 20% of this is simply to repay his expensive Credit Suisse loan. He created this short-term expensive loan and we had to repay half of it this year.

Where did that Credit Suisse money go? Overall, K1.9 billion goes to repaying previous debts – this does not add to our total debt levels – I repeat, when you re-finance a loan, you do not increase debt levels. Importantly, and this is a fact O’Neill ignores, all of the additional funding will be good, cheap financing – with most of it expected at an interest rate of 2.5%.

The funding will be linked directly to the reforms being undertaken as part of the PNG-led program to escape from the economic holes left by O’Neill. This means funding linked to the SOE reform program which is being prepared. It means funding for our increases in the development budget.

“Let us go into some more detail. First, let us explore O’Neill’s debt legacy. He claims he left a public debt of K27 billion. What is the truth of this? The fact is the figure is much, much higher. We still don’t know exactly how high it is as we are still gathering data on the level of government arrears.

But we do know these facts. The 2019 MYEFO report provided a mid-year update on the state of debt in PNG. The figure included in this report was K28,126 million.

However, he was hiding many debts that simply were not on the books. For example, despite the fact that the national government was paying interest on certain loans and should have been counted as public debt under the Fiscal Responsibility Act, he continued to deny they were part of the public debt stock.

Specifically, this included K600 million for the Motu-Kea Port, K375 million for the Solwara undersea project, and K201 million for NCD roads. In addition, his fake numbers were not based on the actual market value of that debt.

We had initially estimated these valuation effects at K1, 480 million based on a speech to Parliament. On further investigation, Treasury now accepts that these were actually a further K641 million higher.

PNG should report its public debt on the basis of good international practice, and at least follow the standards required of PNG businesses in basing debt on current market values. Transparency is important.

But wait, there is even more. The absolute minimum level of arrears at the start of 2019 is K1, 982 million. This is the amount we have built into the 2020 Budget Strategy to start repaying these arrears over the next two years. There will be a strong vetting process to ensure that only legitimate bills will be paid.

But we know there are hundreds and hundreds of millions owed to PNG Power, to public servants that are over the compulsory retirement age but are still receiving salaries simply because funds weren’t provided for their exit payments, to businesses that undertook valid contract work in good faith but have been betrayed through non-payment.

So the actual starting point for the O’Neill legacy is K35, 667 million. This is a lot more than his claim of K27 billion.

But wait, there is even more. For we are finding out about all the extra hidden loans he has put into the State Owned Enterprises. We have some figures on Kumul Consolidated Holdings. These show a further K1, 285 million in commercial loans.

Some of these are extraordinary borrowings and highlight the fake budgets of the O’Neill years. For example, one of these loans, worth a massive K225 million, is a loan that KCH had to take out with BSP to pay a forced dividend to the state, even though KCH clearly did not have the money.

This is probably actually illegal. There is another K470 million of loans for the massively over-priced Motokea Port and this is on top of the K600 million now recognised as part of the public debt.

So that relocation cost over K1, 070 million – a massively over-priced project according to everyone I talk to in the private sector. And these debt figures do not include further debts still in Kumul Minerals or Kumul Petroleum.

What is even more extraordinary is this means that under the O’Neill years of economic mismanagement, debt increased by 435 per cent. It was K8, 485.6 million when he started. His debt legacy was an extraordinary K28, 466 million higher when he was finally kicked out of office.

So he has the hypocrisy to criticise the actions of the Marape-Steven’s government to get out of this extraordinary debt hole he has dug for this nation? He increases debt by 435 per cent.

Over the next five years, debt is expected to increase further – but only by 29 per cent. By 2024, public debt is estimated to be 29 per cent higher at K47, 998 million. 435 per cent increase vs 29 per cent – which government is the better manager?

STEPS OUT OF O’NEILL’S DEBT TRAP.

PNG is now on a path of budget consolidation to get out of O’Neill’s debt hole. The public debt to GDP ratio will fall from 42 per cent inherited from O’Neill down to 38 per cent by 2024. The new government has already indicated it is willing to make the hard decisions to get out of the economic hole left to this nation.

For example, it includes the cuts in the Supplementary Budget of K1, 131 million as a result of the Due Diligence exercise. It is reflected in the actions to reduce the continuing blow-outs in the recurrent budget such as the over K800 million wages blow-out in 2019 due to deliberate under-budgeting by O’Neill.

Importantly, the quality of spending is also being changed as part of the Marape-Steven economic reform program. The development budget, including our Public Investment Program, is projected to grow from K4, 715 million in 2019 up to K8, 585 million.

As a share of the budget, it will increase from 28 per cent to 41 per cent. This government is about more responsible expenditure with declines in budget deficits, but it is also about spending the money better through more on our development programs and less through public service wage and goods and services costs.

This is in stark contrast to the O’Neill years with constant cuts to the development budget and a demonstrated inability to control public service costs.

Second, on the truth of O’Neill’s claims about the K3.8 billion in external financing being discussed. This is not all new debt as claimed by O’Neill. Indeed, almost exactly one-half is simply rolling over existing external loans. Specifically, there is K899 million of commercial external debt repayments in 2020.

The vast majority of this is having to repay the expensive and wasted Credit Suisse loan taken out by O’Neill. He is accusing us of doing something wrong when what we are having to do is simply pay the expensive debt that he took out!!

There is also the budgeting of K990 million for rolling over the Australian Bridging Loan provided late last year to help protect the budget from massive expenditure cuts on top of the reductions in the 2019 Budget. So K1.9 billion or half doesn’t add to the debt stock.

The other K1.9 billion does add to our debt stock, but in a totally different way to the O’Neill legacy. For this government is looking at good, cheap financing to support good investments and policy reforms, not expensive financing to pay dodgy contracts for his cronies. The expected interest costs of the Australian borrowing is around 2.5 per cent.

What a contrast to the Sovereign Bond at 8.375 per cent. K990 million is expected from a syndicated borrowing being organised by the Asian Development Bank. No need for dodgy fees and commissions.

And the debt cost is expected to be four percentage points lower than the commercial borrowings undertaken by O’Neill. This funding will be linked to ongoing economic reforms. The figure also includes K330 million in planned financing from the Asian Development Bank to start important reforms for our State Owned Enterprises.

So in O’Neill’s lies about this K3.8 billion funding, let’s be clear. Over 20% of this is simply to repay his expensive Credit Suisse loan. Where did that money go? Half of it goes to repaying previous debts. All of the additional funding will be good, cheap financing – with most of it expected at an interest rate of 2.5%.

The funding will be linked directly to the reforms being undertaken as part of the PNG-led program to escape from the economic holes left by O’Neill. This means funding linked to the SOE reform program which is being prepared. It means funding for our increases in the development budget.

It is not about “dependency on the IMF and the World Bank” as they are not providing any of the funding. Good cheap financing is part of our economic reform program to get out of O’Neill’s budget hole, his growth hole and his foreign exchange hole.

As a proud PNG business leader, with a diversified family business built up over nearly 80 years, I will not stoop to his personal attacks on parts of my business. History will judge our economic management records. Yours was a great big fail. With the wisdom of the new government, I’m sure I will do better. And the international community believes this to be the case.

This is why they are backing and supporting our homegrown reform program because it is a good reform program. This would all have been so much easier to accomplish if we were not having to deal with fake budgets of previous years that led to such a major increase in deficits and unsustainable budget deficit levels.