The Strength of a Mother 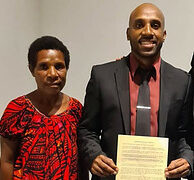 The strength of a woman  cannot be underestimated. I walked away knowing she had been through a lot so that I can be where I am now. She had sacrificed so much for me to be here. She had gone through worse and every time she hits rock bottom, God was always there for her. My life’s achievement was a reflection of her commitment, hard work and faithfulness to God. Fred Kaki.

The strength of a woman (a mother) cannot be underestimated.

“Noken wari Papa God blo yumi stap” that was what she whispered after learning that I didn’t get any offer after year 12. I was devastated, angry and hopeless.

Growing up in a settlement, life is tough every day and I knew exactly what was waiting for me and it’s not something any parents would be proud of their sons to be part of.

The strength of a woman cannot be underestimated. Like every dedicated mother would do, she never gave up on my dream. Equipped with only faith, determination and common sense, she pushed to secure a space for me and was successful.

However, the question of funding became the issue especially for a single mother without any educational qualification and steady income to support 4 children.

Talk about family support, there was none. I remembered waiting with her near a shop for an uncle who promised to help with my school fees. It was a rainy day and she insisted we go and meet up with this uncle of mine.

We waited from 8am to 4pm with the heavy down pour, the uncle never came. He never called to check on us. He never fulfilled his promise. She never gave up, she asked another uncle of mine.

This uncle had other commitments far more important than supporting me. There was absolutely none to turn to. I was very frustrated because these two uncles while studying in colleges, she supported them financially with whatever little she had saved from marketing.

My hope for going to school started slipping away. She still insisted to go register with whatever little she had saved up. The registration day came and I went, praying, hoping that the amount was just enough to get me registered.

Standing in that line with other students, I was nervous and afraid of what’s going to happen in the next few minutes. I was the next to the counter I gave in my registration form with the receipt.

The figure behind the counter frowned at my papers as if it was too small for him to read and told me it’s not enough to register. I tried to convince him that the remaining will be paid as soon as possible after classes starts but that was not enough.

I walked home disheartened, and so angry at my relatives not supportive. There on I knew, where my life was heading to; Life of uncertainty.


The next ten months was very challenging. Out of school, no job, and roaming around the neighborhood aimlessly was the new life. People started talking at my back, “ em bagarap nau” like I was a vehicle with an engine problem sitting there collecting dust.

She would encourage me every day; “Noken wari, gat time blon olgeta samtin stap. Papa God blon yumi stap”. Little did I know she was praying every single day for me. Praying that I will not end up like the majority of our youths today with so much potential to excel in life, yet so little or no support at all.

This is the story of Fred Kaki, Mr Kaki is a resident Medical Officer at Alotau Provincial Hospital in Milne Bay Province.

A job is a job. Washing vehicle at the famous Kilakila car wash was her thing. She did that so she can support me and my siblings. I had to help her out like every other elder sibling would do.

For the first time, I got to see how she manages whatever little she earned. It was tough for her, but with her God given wisdom she was able to support us.

Blessings comes in unexpected ways. Few months after amplitude tests and interviews with Esso Highlands Limited. I was shortlisted for an intern’s job.

She was very happy when I told her about it. The first thing she said was, “ savim money na go back lon skul”, which I did for three and a half years while working.

When I told her, I was ready to go back to school, she said “ you laik go back skul, you can go nau”. Upon her advice, I applied and was successful in securing a university placing. This was the start of something big for her.

Never before, one of her own child has gone to a university. School fees was not an issue this time around. She was very happy seeing her son picking up the pen he left few years back.

She was always there to support in whatever possible ways she can ensure whatever needs I had been met. She always reminds me with her famous line:“ tingim Papa God olgeta time lon life blon u, na skul gut”.

Mother knows best. After foundation (1st year), it was either Geology or Medicine for me. Still caught up in between with this two offers, who else is a better adviser than my own mother.

I asked her and this was her response; “wok doctor em bai stap olgeta time na tu em wok blon helpim ol sick man na meri”. Upon her advice I took up Medicine. And it was a life changing experience for me over the next years as a medical student.

Fred is of mix parentage of Goroka in Eastern Highlands and Goilala in Central Province of Papua New Guinea.

Fast forward to early 2021. She came to see me off at the airport for my new job as Resident Medical Officer. She kept on asking and checking if I’ve got all my things packed.

She knew I was heading into a new world. A world where life offers a lot of challenges and expectations. Just when my flight was called over the airport’s PA system she whispered and said; “noken lus tintin lon Papa God”.

I walked away knowing she had been through a lot so that I can be where I am now. She had sacrificed so much for me to be here.

She had gone through worse and every time she hits rock bottom, God was always there for her. My life’s achievement was a reflection of her commitment, hard work and faithfulness to God.

Happy Mother’s Day to all single mothers (playing a fatherly role as well) .

Your children are your story to tell.

Edited and published by Solomon Aplas.