Why I Took The Job | Bryan Kramer

WHY I TOOK THE JOB…

On Sunday I received a notification on Facebook that Wilfred Kepui mentioned my name in a comment. When I clicked on the notification it took to me to a post by Remase Hariwa (real name Augustine Pouru. Mr. Pouru posted the following message on his timeline:

“There’s a little girl around the age of 6 or 7 that has been continuously sexually abused by her grandfather in absence of her parents at (address I’ve withheld – somewhere in Port Moresby). 2 weeks ago she was heavily bleeding and reported the matter to her mother. The mother reported the abuse to Gordon’s Police Station only to be told by the Officer at the counter that Police did not have any fuel, requesting her to pay them K100.00 for fuel. Poor mother could not afford K100. fuel money so the matter has remained unattended till today. The molester is still living happily out there? How broke is our Police Force??”

“I am tagging my mainstream media friends, Scott Waide, Sylvester Gawi, Erbiri Zurenuoc so we can be her voice and bring justice to this innocent little girl. Child abuse is real”

Soon after posting the above message Wilfred Kepui commented notifying me.

I responded asking Mr Pouru to please inbox me the details of the mother’s name and contact number.

He replied he doesn’t know the mother personally but heard of the incident through a friend who brought it up in conversation as they were walking past the Gordon’s Police Station on their way to the bus stop. He said he will try contact them tomorrow to find out if they can assist locating the family.

I explained that I had a Ministerial hand over take over program tomorrow morning as well as a full debriefing from Police Force Hierarchy and Divisional Commanders from around the country and will raise it with the Commissioner as a matter of priority.

During my key note speech I made mention of this incident. I also made the point the only reason I accepted the invitation by the Prime Minister James Marape to join his Government and be part of his Cabinet was to take on the Ministry for Police to address the escalating issues of sexual violence against Women and little girls, including children generally.

Following my speech I passed on Mr. Porou’s contact to NCD MetSup Perou N’dranou asking him to look into it ASAP.

An hour later, with the assistance of Gordon’s Police and Mr Pouru taking time off work, we able to locate the mother and little girl who is actually 5 years of age. Police arrested her grandfather, I then contacted a friend to have the mother and her daughter placed at Bel Isi Safe Haus to ensure she received urgent medical treatment.

Following the interview of the mother is was discovered two other girls living with them were also victims of sexual abuse.

When I thanked Mr. Pouru for bringing this issue to my attention he said he had two young boys and was heart broken after hearing of the story from his friend.

Two weeks ago, straight after being sworn in as Minister for Police I explained to the press that I intended to run a social media program where the public would be able to directly get in touch with me to raise their concerns about policing issues, an initiative focused on making it safer for mum’s and dad’s and their kids.

Yesterday’s incident is one such example of the changes to come. As promised you can expect sweeping changes in how our Police address sexual violence and Police brutality.

To avoid any doubt, I’m still very much committed to addressing high-level corruption, once I’ve had the opportunity to address the issues facing our Police Force I expect them to take the lead without political interference.

Lastly, all of this was only possible under the leadership of Marape Steven Government. 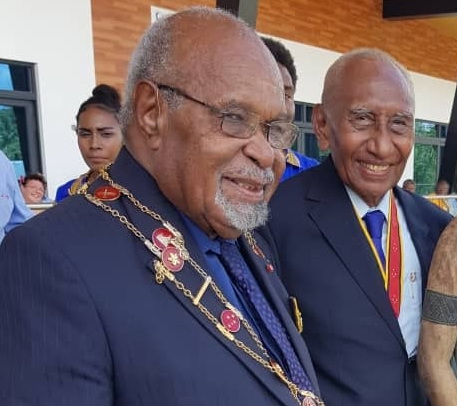