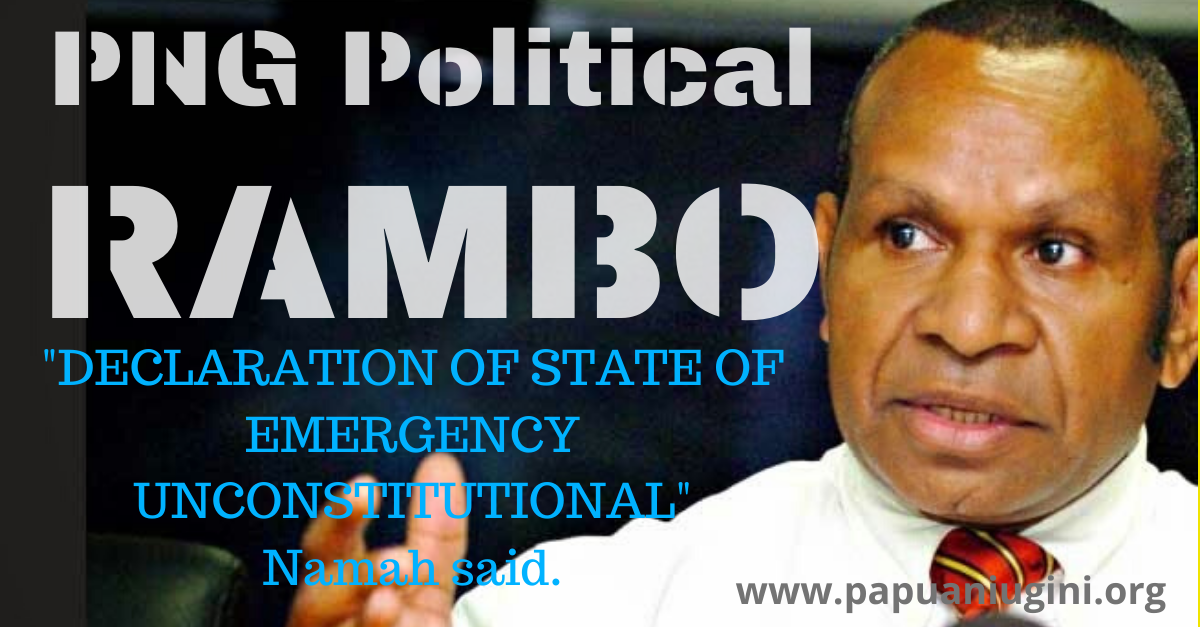 The important work of transition from the outgoing administration to the new Coalition Government is underway in Vaimo, Sandaun Province, with more than half of the elected Members of the Tenth National Parliament working on the consolidation of policy agendas and the articulation of work plans.

Leader of the Opposition, Hon, Belden Norman Namah said a smooth transition of authority to the new government is in the best interests of the country, and called on the outgoing Prime Minister to come to terms with the realities of his defeat.

“Our Members of Parliament have gathered in Vanimo Town to undertake all of the work that is required for the transition from the previous administration to the swearing in of our Coalition Government,” Mr Namah said.

“You will not hear much about the outgoing Prime Minister in our internal discussion or public statements, because our country must move on and get the country back to work.

“Each of the twelve Senior National Leaders who spoke at our news conference on Friday clearly articulated the reasons why they and their parties made such an important step to remove an incompetent government.

“Our Coalition Members are together because we want to serve our country, and to right the wrongs of the past 18 months so that we can get our economy back on track, and our people back in jobs.

“So the only message I have for the outgoing Prime Minister, is to call on him to act in the best interests of the country and resign his commission so that Parliament can be recalled immediately.

“It was abundantly clear for the Nation and the world to see on Friday, that James Marape has lost the support of the Parliament and can no longer govern.

“He has two options before him today. He can sit and sulk for a few weeks while the Vote of No Confidence runs its course, or he can do the right thing by our country, and tender his resignation to the Governor-General.

“Tendering his resignation is the most courageous approach, because just sitting and waiting for the axe to fall is easy, but signing your own termination take guts.

“My word of warning to him is that he does not use physical threats or intimidation against Members of Parliament who are seeking to travel to Vanimo to join the new Government.

“Deprivation of the freedom and liberty of elected Members of Parliament is a further illegal act that will not be tolerated.”

Mr Namah said now that Coalition Members are in Vainmo, with more on their way, the incoming Government Coalition will continue the work of Transition and articulating work-plans in key areas.

“Our coalition is made up of many of the most senior Members of our Parliament including former Prime Ministers and Deputy Prime Ministers, current and former Governors and many energetic and younger Members.

“We have brought all of this experience together so that we can fight for the restoration of our country our proud country.

“This is not about being Prime Minister, or who will be a Minister, our coalition is all about getting our country back on track.

“We have a lot of work ahead of us over the coming year and a half before the next election.

“The reality is that it took 18 months to cause so much damage and destruction, and we will do everything within our power to fix this damage and to revive our economy over the same period of time.

“While some things cannot be repaired immediately, such as the repayment of the billions of Kina in new and wasted debt, there is a tremendous amount that we will achieve in that time.

“First and foremost, we are in unanimous agreement that the resource projects that have been stalled or stopped, will get underway as the highest priority.

“Even before the swearing in of the new Government, we are reaching out to senior resource sector leaders to get negotiations moving so that we can start creating new jobs from the start of the new government.

“The time for dithering and empty promises is over, now is the time to roll up our sleeves, get to the negotiating table and hammer out solid agreements to get the work started.”

“GOD SAVE OUR COUNTRY.”

Leader of the Opposition

ALLAN BIRD: To the Sepik People of Papua New Guinea

GARY JUFFA: We are Marching to a Better Future

PM JAMES MARAPE: History will Judge Me on My Performances as It will Judge All Who went Before Me and Those Who will Come After Me