The Papua New Guinea Defence Force has reaffirmed they will not retreat but will pursue their presence alongside the police in the Highlands Provinces to ensure warlords and criminal elements are brought to justice.

This was the statement from the Chief Of Defence Force Major General Gilbert Toropo following the current lawlessness in the Highlands provinces of Hela, Southern Highlands and Enga.

According to a media statement from the Chief Of Defence Force Major General Gilbert Toropo, a PNGDF officer has died last Friday at the Mt Hagen Hospital after he was shot by armed men that were harassing a local community and firing weapons.

The officer was part of the Security Force (PNGDF) troops in Tari that were alerted last Friday to attend to the incident when he got shot. 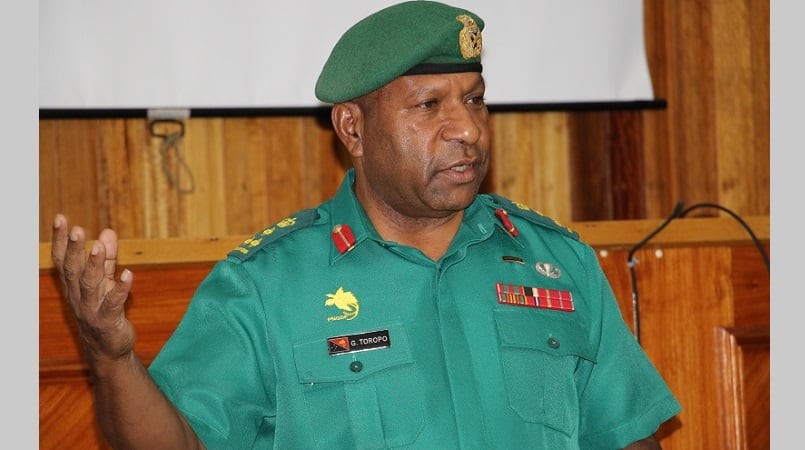 A re-enforcement of troops went in on Saturday and after hours of gun battle shot death four criminals, including the key person who shot and killed the soldier in the earlier shooting incident.

Commander Toropo says Security Forces were deployed to the region to ensure the safety, stability and security of our population in Hela and other parts of Highlands.

Therefore, he condemns the actions of the gunmen and the criminal elements for the attack on the Defence Force and will not tolerate this nonsense.

He says the PNGDF will remain in the Province as the long-term growth and development plan is to establish a third Infantry Battalion within Hela in accordance with the NEC Decision of 2014.

This will see the presence of close to 1000 troops in line with our constitutional responsibility to deliver security and stability to the region to support economic growth and provide border security.