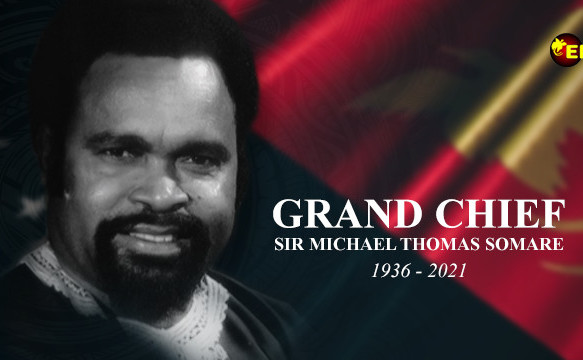 Here are some announcements on the State’s program for the late Grand Chief Sir M T Somare’s funeral programs.

But firstly may I say, it has not been an easy few days and especially trying to balance all differing recommendations on what is a fitting send off for the Father of our Country.

For instance, the Cabinet had to ask the family to reconsider their request for the burial site to be at Wewak. However it was not to be so, especially in the face of an existing Will and an already prepared tomb when the Grand Chief was still alive.

And so with discussions with the family , ESPG, a council of National Leaders and Cabinet; the following events will unfold in the next two weeks to send him off to a dignified rest he truly deserves.

1. Starting tonight and for the next 10 nights we will have ‘housecry’ at Sir John Guise indoor stadium in a Covid sensitive manner.

To the public, please don’t come unplanned as we have announced nights in which all our different tribes can visit the housecry. Your Leaders will coordinate arrivals into the housecry to pay respect to the family and GC Sir MTS the way we do in Melanesia.

It will be live-streamed and broadcasted too so you can also watch at home. This housecry will be more of a worship and song in which we reflect on this great man’s life and his impact on our country.

In between now and the funeral and burial programs, I ask our citizens and residents to continue paying respect to our national Father by being somber, solemn, quiet and peaceful as we go through this sad but historic time.

Funeral and burial are just a part of the two weeks of recollection and celebration of the life of the greatest politician and the greatest contributor to our nation’s history.

2. On the 11th of March, Parliament will have a special sitting in which the Head of State and Chief Justice and Judiciary will join us in National Parliament as we receive the body of the late national Father which will lay in State. This parliamentary sitting will be beamed across our country and all over the world.

3. On the 12th of March, we will have a dignified funeral service at the Sir Hubert Murray stadium, the venue in which he pulled down the Australian flag for the last and hoisted our flag for the first time declaring our Sovereignty.

4. The family said that the body is not in a condition to move throughout our 20 Provinces and our region of Bougainville for national farewell and last respects.

And so we will do an uplift by media of all programs so our people can see, hear, read and know better this one person who has united PNG.

I ask all Governors and MPs to locate places of down link where our people can watch this historic event. We have recommended schools throughout our country to be venues where communities can gather especially on 11th and 12th of March to see the events. We will also ensure the programs in Wewak is uplifted for viewing.

5. We will set up a big statue of GC Sir MTS at the Waigani round about facing Parliament and National/Supreme Court and the Waigani seat of Government. NCDC led by Governor P Parkop and National Museum will designate a Somare Unity and Peace Park land. And at the Independence Hill, we will place a memorial monument. And his final resting place at Wewak will be transformed into a Somare Museum.

6. The Body of late GC Sir MTS will rest on Saturday with the family and close family friends on the 13th of March 2021.

7. On Sunday the 14th of March 2021 the Body will leave Port Moresby for Wewak ESP and the burial programs including customary activities will take place coordinated by ESPG , Angoram district and family. National Government under my watch will precede over this leg of programs untill all matters formally concluded.

These are some things I thought I should announce at this stage. I beg our nation for understanding and to rally together in unity, kindness and solemn respect for the Father of our country.

Rest In Peace GC Sir MTS , the father of PNG.