The Opposition has been a lone voice against Prime Minister James Marape’s closure of Porgera gold mine in Enga Province and his New Porgera deal announced last month with much pomp and celebration. Mr Namah said at the time that the new deal is “no deal” and that it “stinks”.

LEADER OF THE OPPOSITION,

Parts of the Framework Agreement concluded in April show that PNG is about to be duped into paying for extra equity in the New Deal and for reopening of the mine with it’s own tax money owed by Barrick Niugini.

The Opposition has been a lone voice against Prime Minister James Marape’s closure of Porgera gold mine in Enga Province and his New Porgera deal announced last month with much pomp and celebration.

Mr Namah said at the time that the new deal is “no deal” and that it “stinks”.

Now that the deal is beginning to unravel it reveals how shoddy and dangerous the whole deal really is.

“In a simple sentence, the father of “Take Back PNG” has sold PNG down the toilet pipe,” Mr Namah said.

Mr Namah drew the attention of Papua New Guineans to the contents of Clause 4 under the header “TAX MATTERS” from the Framework Agreement to make the judgment for themselves.

(a) The resolution of all disputes, disputes and other matters relating to taxes that relate to arrears for Old Porgera and are payable by Barrick Niugini and any of its Concerned Affiliate, up to Effective Date is an essential condition for Barrick Niugini to initiate the commencement of mining operations for New Porgera.

(b) The Project Company should not be responsible for the repayment for any amount agreed as part of any settlement reached between Barrick Niugini and the Commissioner General of Internal Revenue pursuant to Clause 4(a).

(c) In the event that the State, the Commissioner General of Internal Revenue or any other agency of the State takes any steps (whether directly or indirectly) to recover or otherwise enforce any tax liability referred to in Clause 4(a) above of Barrick Niugini or any Concerned Affiliate (including any decision by the Commissioner General of Internal Revenue to refuse an objection lodged by Barrick Niugini I respect of any such purported Tax Liability ) then Barrick Niugini shall be entitled to immediately terminate this agreement by written notice to the State within 30 days of becoming aware of such action and this agreement will be of no further force or effect except to the extent that Barrick Niugini or the State has accrued rights under it or a provision of this Agreement is stated to survive termination of this Agreement.”

“In plain English this reveals that Marape’s deal hangs on this Clause. This Clause means PNG gets to pay for reopening the mine and Barrick gets to collect future revenue under the pretext it paid for State’s interest upfront.

“I am told the State is owed K1.2 billion in tax arrears by Barrick. We need the Commissioner General of IRC to tell us exactly what the tax liability is.

“The restart of Porgera including the cost of the State, Mineral Resources Enga and Landowner’s increased equity participation has been put at roughly that amount.

“It would appear Barrick has arranged it in the Framework Agreement so that PNG funds the extra equity and the restart of the mine with the tax arrears owed to it.

“And the company can sit back and laugh all the way to the bank over the next ten years ‘recouping’ money it purportedly paid upfront for PNG’s extra equity, knowing full well it is our money from Old Porgera.

“We have been duped. We have been made a laughing stock of the international community. Yet the Prime Minister, his band of ministers, governors and supporters have the temerity to celebrate a victory.

“I see no victory. If the State does not agree to Clause 4 (a) than there is no deal. If it does, Barrick uses PNG’s own money to restart the money, pay for additional equity and benefits and then collect future revenue on our money that it has used to pay for equity and to reopen the mine as well as a hefty management fee.

“How is that a good deal?

“I want Papua New Guinea to know that those who have stood watching and clapping as this inexperienced Prime Minister has single handedly destroyed a profitable gold mine, scared away credible foreign investors, crashed our credit rating, and cost thousands of workers their jobs and caused hundreds of businesses to collapse are equally to blame.”

GOD SAVE OUR COUNTRY! 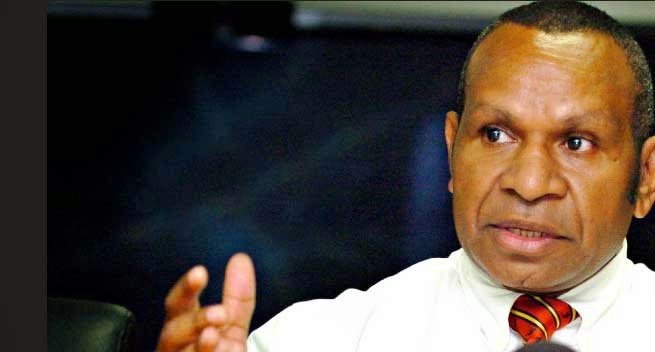