Prime Minister of Papua New Guinea Hon. James Marape is calling on all public servants’ currently working to think about going into volunteer service to go out into rural areas and really see the need of the people out there to help them make better policies that actually work for the people.

The Prime Minister, Hon. James Marape, MP has launched the National Policy on Professional Volunteerism 2020 – 2025 today at the APEC house, Port Moresby and put his hand up to be a professional volunteer as well.

In his keynote address, the Prime Minister said he looks forward to seeing the Public Service working together with volunteers through the National Volunteer Services in delivering basic service to Papua New Guineans in rural areas of the country. 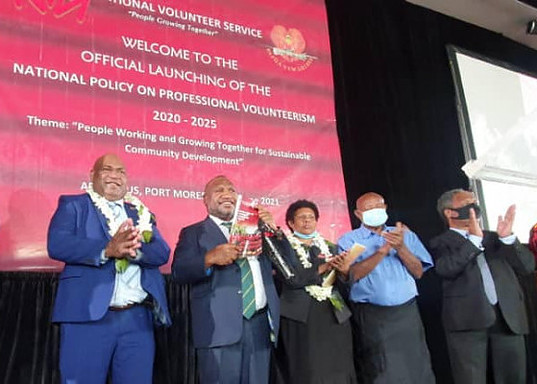 He said it is possible to make PNG the Rich Black Christian Nation when everyone puts their hands together and mobilizes all talents that we already have to develop the country.

The Prime Minister gave the highest commendation to all volunteers’ rights across the country.

“Volunteers who work around the country, sometimes with little to no regular salary, are real change makers,” PM Marape said.

“You sacrifice your time to bring much-needed services to the people because you recognize the people’s need and you have the heart and passion to help them.

“I am aware that every fortnight, the Government has to look for K2 million to pay public servants’ salary, despite them putting in less than 30 per cent of their time at work.”

PM Marape is now calling on all public servants’ currently working to think about going into volunteer service to go out into rural areas and really see the need of the people out there to help them make better policies that actually work for the people.

The Prime Minister said when his Government decided to put the National Volunteer Services under the care of the Minister for Defense, they did not do it without thought.

He said they did it so they can utilize the Defense Force personnel in civic duties as well.

“The Defense Force will also be asked to do restructure and create a position for a Colonel to take care of this initiative.

“We will restructure the Defense Force to start a national cadetship scheme where school-leavers will spend some time as volunteers before they can go on into colleges.” 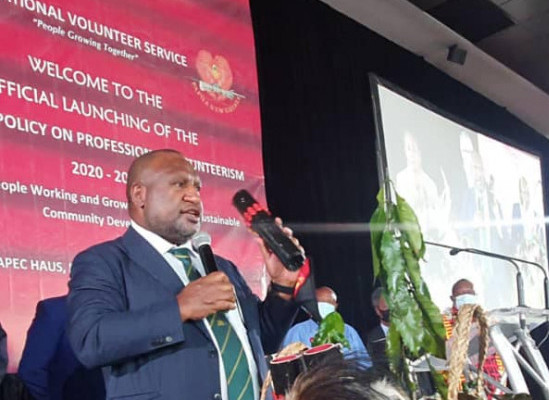 The Prime Minister believes that this will build character in our youths and create in them a passion to serve for the greater good of the country.

He also called upon youths who are currently out of school and have no formal employment, existing public servants’ and retirees to think about going into volunteerism as well to help people in rural Papua New Guinea.

Prime Minister James Marape added that if you are someone who would like to see real development and changes to service delivery instead of sitting in air-conditioned offices in Port Moresby drafting policies that do not have people to make work, volunteerism is the way to go.

Word and pictures by Department of Prime Minister & NEC.