Undermining of Parliamentary Democracy and the Rule of Law by the Speaker and Prime Minister.

Unconstitutional and Criminal Actions of the Speaker.

The Speaker has continued to act unlawfully and in so doing breached both the Constitution and Supreme Court Orders, and will now be held accountable for his actions and potentially face criminal charges.

The illegal and unconstitutional actions by this Speaker over the past month has seen him facilitate the takeover of the Legislative Arm of Government by the Executive Arrn led by his partner in this matter, James Marape.

This subversion of democracy and these seditious a. leaves the Opposition with no other option but to again seek legal adjudication by the only remaining Mily independent Arm of Government, the Judiciary.

An urgent application is being filed with the Supreme Court on a range of these matters that must be resolved In the interest of democracy and good govemance in our country.

ILLEGAL ADJOURNMENT OF PARLIAMENT
Firstly, the unilateral decision by the Speaker to adjourn Parliament on the 14.” December to le December 2020 was illegal and un-Constitutional as he usurped the authority of the Parliament.

The deferral of Parliarnent can only be done by the Parliarnent, not by the Speaker under some false pretence that he has dictatorial authority.

The Speaker is the Chair of House proceedings, he is not the House, and the Speaker is certainly not himself an arm of Govemment.

BUDGET PROCESS IN CONTENIPT OF SUPREME COURT
Secondly, the Treasurer and the Speaker have breached the Constitution by presenting the Budget Papers that had been struck out by very specific Supreme Court Orders.

The Five-man Bench of the Supreme Court had ruled that the budget passed on 17. November 2020, including the documents that were tabled, was unconstitutional, invalid and ineffective.

As a consequence the full process rnust be re-commenced, including the Budget going before the Plans and Estimates Permanent Parliamentary Committee before it could be tabled in Parliament.

This mandatory requirement did not occur today and so Is in breach of Section 209(3) of the Constitution.
However, the Treasurer took those same budget books that were tabled on the 17. of November 2020, and the Speaker then read the same letter from the Govemor General dated 17. November 2020.

However, the Speaker again diose to do the bidding of Marape, and facilitate these actions that are in clear conternpt of the court orders of the Supreme Court of Papua New Guinea.

MOTION OF NO CONFIDENCE TO GO TO SUPREME COURT
Finally, the Motion for a Vote of No Confidence in the Prime Minister was on foot, having been served on the Speaker on Monday 14. of November 2020 at 14.10pm, two (2) days prior to Wednesday 16. November 2020.

It does not matter where the political numbers rnay have shifted, Constitutionally prescribed Parliamentary Procedures require that the Parliamentary Private Business Committee must meet and deliberate on the technical competency of the Motion to proceed.

The Committee was scheduled to meet at 12 o’clock pm today in order to deliberate on the motion. but the Speaker and the Govemment of James Marape adjourned parliament for five (5) months before this process could run Its legitimate course.

This unconstitutional action by the Speaker is a deliberate attempt to frustrate Parliamentary process that is enshrined in Section 145 of the Constitution for the Parliament to entertain a Vote of No Confidence Motion.

After its technical validity bei, confirmed by the Private Business Committee. the motion has to be reported to Parliament. and then Parliament adjourns for seven (7) days and comes back to vote.

We will not allow the unconstitutional and illegal behaviour of the Speaker to save Marape from facing a Vote of No Confidence.

Marape must answer for his failures and mismanagement. and that means he must face the full scrutiny of the Parliament over his performance.

If he thinks he is so secure, and has the genuine support of the Parliament what does he have to fear in this rnotion going forward?

PARLIAMENT MUST RESUME AND DEMOCRATIC PROCESS RESTORED
We will not let Marape shut down democracy for five (5) months, a. we will exercise our Constitutional right to have Parliament sit and consider unresolved business.

Our country is in the middle of a crisis and our people expect our elected Members to work together to save our country.
The people of Papua New Guinea elected us to Parliament. to go to work in the Parliament. not so Marape can suspend democracy for half a year.

An urgent Application is being filed in the Supreme Court that will seek the Recall of Parliament to process the Motion for a Vote ot No Confidence.

Just because Marape hoodwinked, induced or threatened MPs to vote with him today, does not mean that he will survive the Vote of No Confidence debate and vote.

In its decision handed down in 2016, the Supreme Court held that a Motion for a VONC was a matter of Constitutional and National importance.

I look forward to this matter to be adjudicated by the Supreme Court in the interests of the prevalence of democracy in our country today, and for decades come.

A LACK OF INTEGRITY WILL NEVER PREVAIL
The movernent of some Members in Parliament today was unfortunate, and all on the inside know what happened behind the scenes.

I am greatly disappointed with the selfish behaviour and lack of integrity of certain Members of Parliarnent who deserted in the middle of the night for inducement, which then swung the balance.

The Members I am referring to know who they are, and have a history going back more than two decades of being ‘persuaded’ to shift their allegiance on the eve of Parliarnent sitting.

I have received apologies of Members who were forced to vote with the Government today, and their reasons for doing so explained to me.

They had been threatened that if Marape survives. and they were not in Marape’s camp, their districts and provinces would be starved of funding and vital services.

These Members will return when their safety is not threatened by the vulgar acts of a desperate and failed Prirne Minister.
This is the warlord mentality that is in the Executive government now, and is destroying democratic process in Papua New Guinea.

But the Nation cannot forget the words of all of the senior Ministers who walked out on the I e of November 2020 on Marape and their absolute disgust at his terrible lack of leadership.

How can Marape sit there surrounded by Members who have gone on record saying his destroying the country?
But we in the Opposition will not stand for this, and we will see to it that democratic pro.ss is not only respeded, but is enforced in our country.

“GOD SAVE OUR COUNTRY.”
HON. BELDEN NORMAN NAMAH, MP
Leader of the Opposition 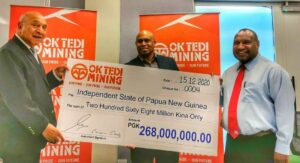 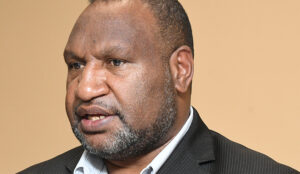 Next post PM James Marape: Our Country Needs Stability and Not Instability.