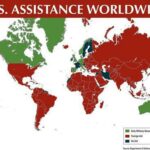 USAID Mission Director for Philippines, Mongolia and Pacific Islands, Lawrence Hardy confirmed this from Manila in a telephone interview with NBC News.

This funding from the US is the fulfillment of its commitment to PNG Rural Electrification program.

SOUTH KOREA INVESTORS ALREADY IN THE AUTONOMOUS REGION OF BOUGAINVILLE