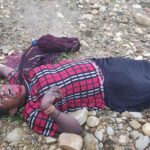 The Deputy Regent of Nduga regency in West Papua, Mr Wentinus Nemiagge has warned the Indonesian Government and President Jokowi.

If they don’t withdraw all the troops (Organic and Non-organic) in the Ndugama region of West Papua within 2 months, he will have no choice but force mass evacuation of civilians to seek political asylum in neigbouring Papua New Guinea.

The warning comes amid ongoing clashes between Indonesian security forces and West Papua National Liberation Army or TPNPB-OPM. Currently over 50,000 civilians are displaced from their villages in the highlands of West Papua.

Over 200 people have died since Indonesian military bombed the villages in Ndugama region in 2018.

Indonesian Military is currently engaged in massive military operations in highlands of West Papua especially in;

Indonesian military is also grabbing land and trying to build its new military Base without the approval of the local tribal leaders.

The situation in West Papua is a time-bomb and could trigger mass evacuation of civilians across the border.

See full Press Release by Central Headquarters of TPNPB-OPM as per attached.

CANADIANS, FATHER AND SON TO BE DEPORTED FOR BREACHING PNG IMMIGRATION LAW

Kindle Unlimited – Explore over 1 million titles, thousands of audiobooks and selected magazine subscriptions on any device