PMJM CALLS FOR PNC PARTY MEMBERS TO MOVE TO THE OPPOSITION 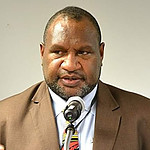 As leader of this Pangu and coalition government, I have made the call for 15 PNC Party Members to follow their leaders to the opposition.

My sincere apologies to these leaders and their people but due to continual clash of opinion from basic politics to policy positions, I’d rather hear the PNC voice from the other side then from within government.

Let me thank the leader of PNC, the Honorable P O’Neill for allowing me to associate with PNC and for PNC’s rank and file’s critical role in my rise thus far.

For that, I am forever grateful and the least I can do is to ensure that your electorates are continually served by government. Like the district roads I instructed for Yangoru and Last Wiru ( for the Pangias) to be continually funded.

To many supporters of PNC who are also my friends, this is nothing personal, government changes over time, leaders argue as professional politicians from our view points and policy orientation.

And you PNC die hards should know that for the 7 years I served PNC, Hon PO knows I served him with total loyalty and dedication until Hon PO himself had no need of me. Ask him.

For instance when the first Laguna camp was set up in 2016 to vote against PMPO with then political heavyweights teaming up, myself plus Hon C Abel took MPs to Alotau to return a week later defeating VONC.

It was not free, like many, we earned our place by working to keep PNC and Hon PO in power for 7 years, but I had to move on when good advises were not considered useful.

In 2017 election rally in Tari , I told Hon PO publicly in front of my people that I will resign from Cabinet in 2019, if Hon PO did not change his priorities including the transfer of 2010 PNG LNG agreement secured 4.27% equity for the 5 LNG provinces.

Resigned I did on the 11th of April 2019, one man on a possibly lonely and unknown path then but thanks to God Yahweh and an army of good leaders, we are here in government a year on.

Today, the decision I took is based on clear dichotomy between PNC and Pangu and hence it is fair for MPs and followers on both side that we sit and debate in open opposite ends.

For better or for worse, PNG is littered with Hon PO led PNC’s 8 years of successes and failures, and as Pangu leads our like minded coalition of leaders to move to a new better direction, we can’t afford infighting from within, hence the call to move PNC to the opposition benches.

We also are revisiting some bad decisions done under PNC led government, including those that has corruption taint over them, so this will allow us the freedom to move with ease.

I hope this bring some clarity to the public. When I find some free time, I will write on the twist and turns on politics soon, keep a lookout in this space.

Prime Minister of Papua New Guinea Hon. James Marape has chosen carefully from a pool of talented and capable leaders…

The Prime Minister of Papua New Guinea Hon. James Marape announced his Cabinet line-up today, and they swearing-in at the…