As part of this Government, I had a long think about what was achieved in the last 18 months.

When James Marape became Prime Minister, our economy was in recession. GDP growth in 2019 was -0.3%. Jobs growth was already in steady decline for a number of years.

Through Sir Ipatas, Kerenga Kua and Johnson Tuke, Prime Minister James Marape has changed the rules of the game in the resources sector.

He got 51% of Porgera. That’s incredible. It was painful for those who were directly employed there but for the country, this is a new benchmark. Something the country will refer to for decades. I admit, I could not imagine such an outcome.

Small and Medium Enterprise (SME) Funding is one area I have been battling in for 25 years. In 18 months K300m given to the sector by Marape Government with another K270m budgeted in 2021. I hope the small people see this.

Prime Minister James Marape pushed ICAC like no one before him. Davis may have been responsible for the legal side but the push was all Marape. He constantly texted myself, Juffa and others to lobby and support it and we did.

26 years nobody could get ICAC passed until Marape. ICAC is here now. Late Donigi and Sir Siaguru would have been proud.

Gender based violence: Marape put in a Parliamentary Committee. Wow. 45 years victims had no voice, now they do.

The ban on round log exports has been talked about for 20 years. Prime Minister James Marape agrees on an increase in Round Log Export taxes to force loggers to go into down stream processing.

20 years we have talked about it. Prime Minister James Marape and his band of intrepid warriors actually did it. Round log export levy was increased from 12% to 50%. Processed timber exports, zero tax.

Improved transparency on our budget process led by Ian Ling Stuckey. We can now borrow at zero interest. We have never done that in 45 years. Prime Minister James Marape backed Stuckey 100%.

Finally, Provincial Government supported well for the first time since 1995.

All revolutionary, all in 18 months. And we got hit with COVID19 for 12 of those 18 months. No government in 45 years had to deal with a global pandemic.


There are other reforms still being worked on. But anyway, some mistakes were made, small silly mistakes when you measure them against what was achieved.

Next year, the Marape government is projecting a 3% GDP growth. Not a bad turnaround from minus 0.3% 18 months ago. Jobs are set to grow again.

I am proud of what this government has achieved for our people in such a short time.

Whatever happens over the next few weeks or months, these achievements will remain difficult to match long into the future. A new benchmark has been set.

I guess it’s true, leaders bring lasting change for the next generation while politicians will focus on the next election. 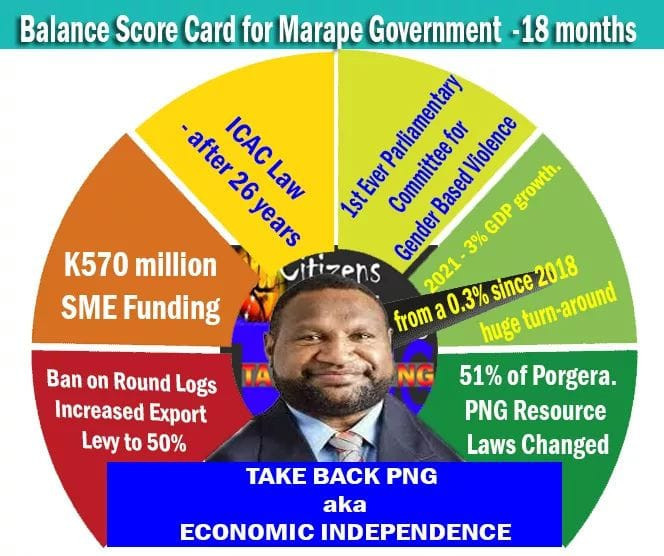