PM MARAPE: I HAVE NOTHING TO HIDE ABOUT ISRAELI GENERATORS 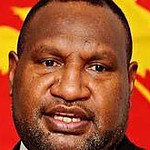 Prime Minister Hon. James Marape, MP says he has nothing to hide in relation to the Israeli generators’ deal which has seen the arrest of former Prime Minister, Hon. Peter O’Neill.

He was responding to a request to Police today by Opposition Leader, Hon. Belden Namah, to arrest all involved in the Israeli generators’ deal including, himself.

Prime Minister Marape said it was ironic that O’Neill was locked up by police last Saturday because of a complaint by Namah six years ago, however, Namah was first to meet him at the cell and all apologetic.

“The worst of enemies are now the best of friends, or so it seems,” Prime Minister Marape said.

“If I have done something wrong in relation to the Israeli generators, why didn’t Namah include me in the complaint to police back in 2014?

“Why wait six long years, until after the arrest of O’Neill, to call for my arrest?

“I reiterate that I will not stop police from arresting anyone, including myself, when investigating matters of public concern.

“I am not one to run away from police to avoid getting arrested.

“I have already stated publicly that I will explain in court, as a State witness, my role in this whole saga of the Israeli generators.”