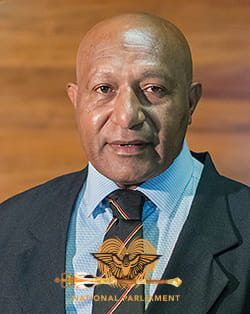 Member for Kerowagi Open, Bari Palma, was declared bankrupt (insolvent) by the National Court in June 2017 over K171,696 in legal costs awarded against him after a failed 2012 election petition.

He appealed the decision, but the appeal was later dismissed, bringing the matter to finality.

After it was uncovered last week, Palma paid the amount in full and, with the assistance of O’Neill’s lawyer Tiffany Twivey, filed an urgent application to have the declaration of insolvency discharged last Friday.

Section 103(3)(d) of the Constitution says that a person is not qualified to be or to remain a member of the Parliament if he is adjudged insolvent (declared bankrupt) under any law.

The issue being contested is whether in this case, Palma having been declared insolvent by the National Court, he was disqualified from being a Member of Parliament and participating in and voting on Parliament proceedings.

Each camp’s representatives converged on the Speaker’s Office to thrash out the issue, only to end up in a heated debate and causing the delay in Parliament’s resumption by almost two hours.

It is now up to the Supreme Court to determine whether he was eligible to be a Member of Parliament and whether he can continue to be one.

When Parliament finally convened the Speaker ruled he would adjourn Parliament to Wednesday until the issue concerning Palma’s qualification is determined by the Court.

The Seven (7) MUST follow WEBSITES for Papua New Guinea and Pacific content. Many people do not have the time to read 15-20 pages articles.…

My dear Rai Coast citizens, please be advised that I’m not resting in a rocking hammock and sipping lemonade under a coconut palm tree by…

PM Marape said: “I repent on behalf of all the men of our country, past and present. I am sorry for the wrongs we have…

The potential for farmers in Papua New Guinea to live comfortably from crop and livestock production is huge. With the population growing at 3%, the…

PRIME Minister James Marape says the allocation of four ministries to the agriculture sector is a complete paradigm shift to get agriculture moving again. Many…

The allocation of four ministries to the agriculture sector is a complete paradigm shift to get agriculture moving again. The Marape Government’s focus on ‘Taking…

Papua New Guinea is being hard hit by skyrocketing inflation – impacting greatly upon citizens with no end in sight. The Bank of Papua New…

Prime Minister of Papua New Guinea Hon. James Marape has chosen carefully from a pool of talented and capable leaders in government, and the appointments…

The Prime Minister of Papua New Guinea Hon. James Marape announced his Cabinet line-up today, and they swearing-in at the government house in Port Moresby,…

Papua New Guinea is undergoing total shit of stagflation. Citizens are silently enduring the effects of stagflation yet NO one to address it. We have…

O'Neill: MPs Do Not Have to Join the Government Side to be able to Serve the People of Papua New Guinea Who Elected Them. 'MPs…

Roger Gillbanks started with the agricultural company Harrisons and Crossfield in 1955, and became the second general manager for New Britain Palm Oil Ltd, which…

PM Marape said from Singapore: “With global consciousness of fossil fuel-induced global warming, clean green energy is the way to moving into the future and…