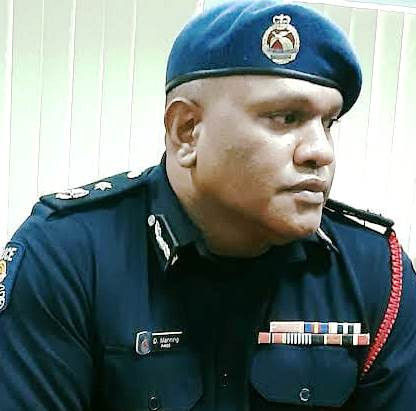 COMMISSIONER OF Police David Manning is calling on the public to refrain from making any false allegations on social media regarding the ongoing cocaine investigation.

In a press conference this afternoon at the Police headquarters at Konedobu, Mr Manning commended Mr Yamasombi and his men for the excellent effort in recovering the drugs as well as cash and making a number of arrests.

“As the Commissioner of Police I am satisfied with the performance of Mr Yamasombi…In fact I commend him and his men for their excellent effort in making this arrest and recovering the drugs as well as the evidence on hand,” he said.

He urged the public to come forward with evidence or refrain from making these unfounded allegations because they can be charged with obstruction.

“I will continue to stand by my men and women until and unless evidence dictates otherwise,” he added.

He appealed to everyone to understand that this is a new and difficult challenge for the constabulary given the fact that it is inadequately resourced and further operates under out-dated legislative frameworks dealing with such crimes.

On Sunday 26th of July a small light aircraft was said to have landed at Papa/Lealea. It was alleged to have loaded 28 bags of cocaine and crashed whilst attempting to take off.

The Australian pilot now identified as David John Cutmore, 52 years old presented himself to the Australian High Commission on Tuesday 28 July 2020. After the Consular had spoken to him, he was handed over to the RPNGC and detained at the Immigration Detention Centre at Bomana and further interviewed.

Police reconstructed the scene with his assistance and raised a number of search warrants.

On 30th July Police executed some of these search warrants at the Sunset Lodge at Papa/Lealea and arrested two suspects being two PNG male nationals. Soon after another search warrant was executed on the Sanctuary Hotel but police were unable to uncover any evidence.

On Friday 31st July further enquiries were made which led to the arrest of another suspect at the Manu Auto Port which led to a local lodge in the city in which a large amount of Australian cash and TV screens were retrieved – these are believed to be items that were brought in on the plane. Another suspect was apprehended on the same day. Both suspects had in their possession AUD20,000 along with confiscated electrical items which are believed to have been brought in on the plane. The suspects confessed to the location of the drug which they said was at a location South of Papa/Lealea. The drugs were located and retrieved on the same day.

“Further enquiries are being made to identify others involved in the syndicate. The pilot was charged under the Migration Act 1978 for illegally entering PNG and fined K3,000. The Constabulary is cooperating with the Australian authorities in relation to his involvement with others in the conspiracy to import the drugs into Australia.

“If the pilot was charged under the PNG laws his maximum sentence would be 2 years for possession of drugs. Whereas his activities in Australia under Australian laws would carry a maximum 25 year imprisonment,” Mr Manning said.

However, he added that the investigators are now looking at laying additional charges on Mr Cutmore under the National Pandemic Act 2020.

“We have risen to and met the challenge with our foreign partners. Together we have effectively disrupted the activities of a significant transnational organised crime group who prey on the vulnerability of nations such as PNG to achieve their criminal intentions,” Mr Manning said.

Further information today has identified additional enquiry into how the drugs came into PNG as investigations are ongoing.