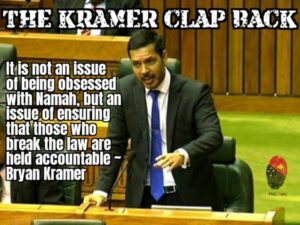 Namah described Kramer’s peculiar interest in his court cases as obsessive and should concentrate on his responsibilities to his people in his electorate.

Bryan Kramer, in responding to Belden Namah’s statement that he is obsessed with him, stated that he rejected the assertion that he was obsessed with Mr Namah, stating that he commits his time to hold those who break the law into account.

Kramer went on to state that if he was Mr Namah, he would be more concerned about whether he would be arrested and charged for committing the despicable criminal act of storming the National Court House and ordering the arrest of then Chief Justice Salome Injia.

Kramer further stated that while the Leadership Tribunal deals with misconduct in office, and dismissing them from office, the Police deal with criminal offences and arresting and charging those who break the law.

He stated that it was not an issue of being obsessed with Namah, but an issue of ensuring those who break the law are held in account for their actions.

Minister Kramer finished off stating that currently, the police are undergoing a major reform, after which they will start to address many outstanding cases involving high profile people.