Re-post from The Sun Bulletin 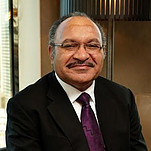 Hon. Peter O’Neill, Leader of the People’s National Congress Party, has warned that “the secret deal places the PNG economy in the category of desperate failing economies” and will cost the country as it further gives away sovereignty to foreign financial directors.

“This is the most disastrous course of action we could ever have imagined this government taking, and is done so with the permission of James Marape who does not realize the implications of placing the economy under foreign control,” Mr. O’Neill said.

“This latest failure is the result of pressure from the IMF, and an undisclosed condition imposed to refinance the dubious billion Kina loan last year under the Australian Export Finance Agreement.

“Papua New Guinea is now in the deepest mess in our history. Never before has any of our successive Governments ever defaulted on debt, or sought suspension as has happened now.”

Peter O’Neill said that while Marape promised no more borrowing, then back-flipped well before the SOE recession, and then said he would only borrow at the cheapest rates, his latest bond issue was at 13% interest rate after he forced the Central Bank to breach its own Act.

“Marape has made BSP take up hundreds of millions of long-term bonds that is now hindering lending to PNG citizens and businesses, and he also bullied the Super funds to take up government bonds.

“This government has raided every last toea from our local financial institutions and now there is nothing left to recover from the billions of Kina in debt imposed on the economy by the reckless SOE.

“In the short period of 12 months this government has lowered the growth projections, with PNG now falling into a deep recession with unemployment rising sharply.

“Marape sat by and watched as revenues collapsed and he did nothing, failed on every resource project negotiation.

“The irony is that if this government and Marape had not failed the French-led Papua LNG project, which had already been agreed but is now shelved, Marape would not be running to the Paris Club.

“This latest bad deal, giving away our National sovereignty, should be the final nail in the coffin of this dead-beat failed government.”

Leader Of The People’s National Congress Party, Member for Ialibu-Pangia