Today I want to somehow capture, somehow explain what the loss of the last week, has meant to me, and should, I think, mean to the country.

Our country has lost a champion in Sir Michael Somare.

I have lost a dear friend and colleague.

But what a life he lived!!

Who could have foreseen that the birth of a man-child in Rabaul nearly 85 years ago was the beginning of a journey that would not only carry that man-child through a tumultuous and exciting life,

but would as well, lead to the birth of a new nation, a nation unlike any other nation ever born in the history of the world?

But those events were fated to occur when Michael Thomas Somare was born in Rabaul on April 9, 1936 and began a remarkable life-journey over the course of the next 85 years.

And, you know, I was there for much of the trip. For we go back a bit, Sir Michael and I.

I first met Sir Michael when we were both running for election to the Second House of Assembly in 1968. Fifty-three years ago.

For fifty-three years Sir Michael and I went through the triumphs and the tragedies, not only of politics, but of life.

For fifty-three years we laughed together. And, yes, many times, cried together.

You know, I believe some men are born for a higher purpose.

There are some men who are born to fly, who are fated to soar above the crowd. Sir Michael was such a man. He was an eagle, who soared above all of us. He was a man with a dream; a man of vision.

And our biggest dream of all, a dream that at first seemed too fantastic to ever come true, was the dream that the Territories of Papua and New Guinea could unite

– not only unite, but unite as an Independent Country, a member of the World of Nations, standing on our own two feet, equal to any in the world.

They said it couldn’t be done.

But Sir Michael put together a crew in 1972 Government that would take us to our goal, to Independence.

That crew included not only Somare, but myself

and John Kaputin from the islands,

He took leaders from every part of the country-to-be, creating unity out of diversity.

And that small group set sail for a goal that we could only dimly see, but with a clear vision of what we wanted desperately to achieve.

And even then, there was no question who was the Captain of the Ship. I said before Sir Michael was born to soar, and to take the People of Papua New Guinea to heights they had never dreamed of.

But this was only because Sir Michael worked harder than most that I have ever known.

I remember he worked late into the night every night, often until midnight or one or two or three in the morning.

I am reminded of the old saying attesting to the making of Great Men.

“The heights reached by great men were not attained by sudden flight,

but by the fact that they, while their companions slept,

were toiling upward in the night.”

Sir Michael toiled late into the night more nights than I have ever seen any man toil….

Those first years, from 1972 to 1978, were the greatest years of creativity, cooperation and commitment to opening Papua New Guinea to the world.

Together, we took on the greatest challenge in the history of any country – the challenge to be independent, to be free.

And there was much to do if we were going to achieve that.

But we did it. We gained the recognition and endorsement of the United Nations.

We created our own Central Bank, the Bank of Papua New Guinea. We bought out the Commonwealth Bank of Australia and established our own PNGBC.

and formally introduced our Kina and Toea on 19, April 1975 five months prior to Independence .

We gained entry to the ADB, the World Bank, the IMF. We became a part of the world economic community.

And through it all Sir Michael was the Captain of the Ship of State, and he steered us safely to the Haven of Independence.

And let us recognise what a huge achievement this was.

Captain Sir Michael was dealing with a land of a thousand cultures. A land of over 800 languages.

A land in which relations among neighbouring tribes and clans had historically been more competitive and even violent than peaceful and cooperative.

Just think about it. The United Nations has only 193 countries. But the Territories of Papua and New Guinea had nearly a thousand different “nations” – a THOUSAND different cultures,

and almost every one of them with their own language. We have five times as many languages as there are countries in the United Nations!!

Now THAT is a Tower of Babel. And that is what Michael Somare confronted in his quest to unite the Territories of Papua and New Guinea into a single nation.

That is what we all confronted. But Sir Michael was the Captain, and he had to take control.

And it was not only the internal challenges. Sir Michael had to deal with the colonial power, with Australia.

And many in Australia were not ready for Independence for PNG. But, led by Sir Michael, we coolly and calmly dealt with foreign leaders such as Gough Whitlam, Malcolm Fraser, Andrew Peacock and others in the region, moving us ever closer to Independence.

Those of you who were not there have no idea of the challenges. This country was not easy to construct! Not easy to make!

How many of you listening today remember the Bougainville Independence Movement?

Our country was splitting apart almost before it even came together. But Our Captain was Sir Michael.

The Constitution for the Independent State of Papua New Guinea put greed aside, and put the welfare of the nation, of the People of the Nation first.

Thanks to the leadership of Sir Michael, we constructed a country that is dedicated to the People, not to special interests.

And thanks to Sir Michael, this country was born in peace.

At the same time that PNG was being created, many other countries around the world were being born in the pain of blood, in the agony, the torment, the anguish of war.

But not PNG. Sir Michael guided this country of a thousand cultures to independence from its colonial master without the loss of a single life in the independence struggle.

And that is why we are here in this Chamber of the People today.

We are here to thank God above for sending us a leader, a liberator, who had the skills and intellect to lead us peacefully into the new world of Independence and self-reliance.

But now the unthinkable has happened. Now Our Captain is gone. We must carry on without him.

Everything we have today, our freedom, our independence, our strong, proud country, we owe to Sir Michael.

But he can no longer join us in our celebration of freedom. 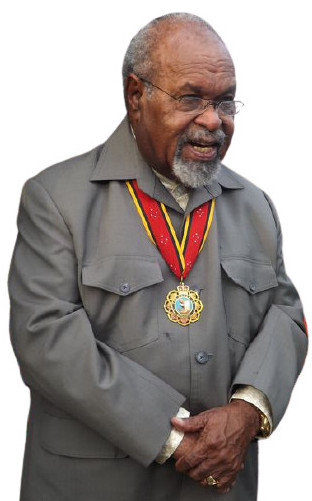 I have called Sir Michael Our Captain, and that he was.

It reminds me of what Walt Whitman had to say in a poem he wrote on the death of Abraham Lincoln.

rise up and hear the bells;

– for you the flag is flung

– for you the bugle trills,

For you bouquets and ribbon’d wreaths

– for you the shores a-crowding,

For you they call,

I wish Sir Michael could rise and join us today. The Nation is calling for him, for he was Our Captain.

He will be sorely missed. But Sir Michael will never die in our hearts.

So thank you, Sana. From the entire country.

And thank you from me, your old friend, your old teammate. I think, my friend, that we have made a good team. And I think our country has benefitted from our efforts.

We can ask no more than that…

I will never forget the last time we were together, on Independence Day in Kavieng last year. It was ironic, but I now know that on that day we were saying goodbye for the last time.

I cannot think of a more appropriate day than Independence to say goodbye to my best partner in the creation of Papua New Guinea.

We will never forget you, my brother. Sleep then.