THE man who coaxed a young Michael Somare into politics more than 50 years ago will be waiting for the body of his “small brother” at the Boram Airport on Sunday.

He decided to stay back in East Sepik with the people after hearing of Sir Michael’s death in Port Moresby on Feb 26.

Sir Michael’s body will arrive at the Boram Airport in Wewak, East Sepik, on Sunday and will be buried at his Kreer Heights property in Wewak on Tuesday.

Sir Pita was at his village in Maprik when he heard about Sir Michael’s death.

Sir Pita was then the member representing the East Sepik districts of Wosera and Dreikikier in 1964.

The young Somare told him he was not popular and that no one knew him.

Sir Pita told him: “I will campaign for you. You will win. PNG has to gain independence.”

So he campaigned for Somare because he wanted him to become prime minister. 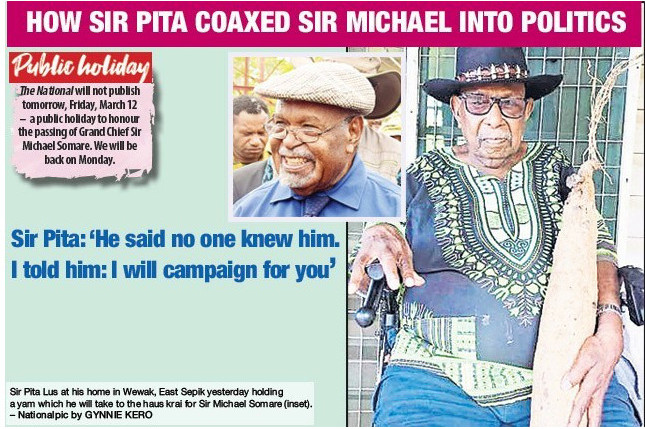 “I rode my motorbike up the Sepik Highway campaigning. The road wasn’t that good as now. I (sometimes) slept along the highway.”

Sir Michael was first elected into the House of Assembly in 1968. He steered the country into independence on Sept 16, 1975.

The date was special too because it was Sir Peter’s birthday.

“We were looking for a date to have independence. So I gave them my birthdate which is Sept 16. I was born on September 16, 1936.”

Over the years, Sir Pita said their bond and friendship grew, although it did not stop them arguing in Parliament over national issues.

He also recalled how he accidently punched Sir Michael one day in Parliament.

Sir Pita was throwing punches at a politician in Parliament when Sir Michael tried to stop him. Sir Pita’s elbow landed on his chest.

“Somare said: Hey, you hit me. I told him you were wrong to get in the way.”

Sir Pita said he did not mean to hit Sir Michael.

The two “brothers” started off differently early in life.

Sir Michael was educated at a young age. His first teachers were Japanese soldiers who landed at his home in the Murik Lakes in East Sepik during the war.

Sir Pita from Maprik worked in plantations on New Guinea Islands and Manus island where he got his “Lus” surname.

While working as a labourer in the plantations, Sir Pita realised he was being a slave to others.

So he returned to Brugam and attended the Bible College run by the South Sea Evangelical Church.

Sir Pita started school when he was 20. After completing Standard Four, he went into politics.

He said it was his mother (a German missionary) who convinced him to join politics and to push for independence.